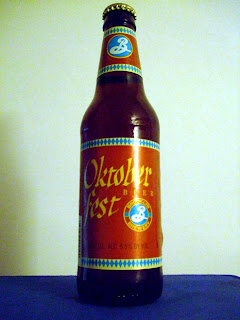 All right, that's really forcing it, I know. But I've got another US beer I need to write about, so indulge me, will you?

It's been hit and miss with the American beers so far. Some have been great, others were no great shakes, so it's anyone's guess as to what this one will be like.

The last Oktoberfest beer I had during this calendar wasn't all that special either, so the sense of anticipation isn't particularly strong with this one. Having said that, the Brooklyn Brewery beer I had was surprisingly good, so it could go either way.

Perhaps I've chanced upon a winner or maybe it will be gopping. The suspense isn't killing me, however there is only one way to find out. 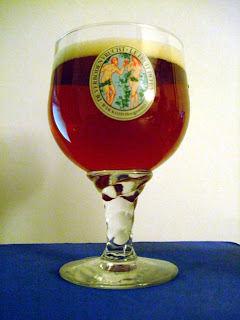 Beer: Brooklyn Oktoberfest Beer
Country: USA
Strength: 5.5%
Colour: Verging on the russet
Smell: Cloying at first, with buckets of cheap sherry and a waft of Evo-Stik, offset with a jar of honey
Circumstance: Just bunged a pan of spaghetti on to line the stomach. Listening to the radio and monitoring the kids
Tasting notes: Admit it, the build-up didn't sound promising, did it? However, this one has character and depth in spades. It's both sharp and sweet at the outset, then unleashes waves of bitterness and fruit alternately so your mouth really doesn't have a clue what's going on. Combine this with a long-lasting, citrus finish and you've got a terrific beer that punches well above it's 5.5% weight. Nice.
Drinkability: Rather good, although the honey could get to you after a bit.
Gut reaction: Fine, I'd say. Not too fizzy, fairly calming, almost warming.
Session factor: Probably best to limit yourself to a couple. It's robust enough, despite its relatively low strength, to demand a bit of respect. That said, I actually quite fancy getting pissed on the stuff.
Posted by Eddie Grace at 21:43