A week without beer 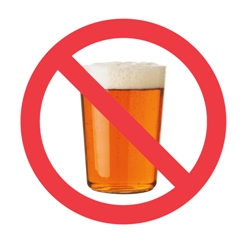 Well it had to happen at some point and given this week's about the quietest in my diary for some months, I've decided it's as good a time as any.

I'm going a whole week without beer. Without alcohol of any sort, moreover. Three days in and it's really not proving too difficult, although meeting someone at Mason & Taylor tomorrow evening might provide a stern test.

Several people have already questioned why I'm doing this, but given it seems like I've been drinking pretty solidly since early October last year, I guess that kind of answers the question. And, dare I say it, I'm becoming a bit beered out.

That is to say, there have been so many different varieties I've sampled and seemingly so many more to try that I'm almost overwhelmed. Of course, next week will be a different matter and I'm sure the enthusiasm will have returned, but for the moment, I just cannot be bothered with it.

Which is a shame as I've noticed a few events around town I'd quite like to attend, but I'm sure they'll come round again. But with a weekend away coming up that involves taking the kids to see their grandparents and my niece's party, I'm sure I'll be able to manage manfully for the next few days.

And, of course, there's always Monday and the launch of a book about the beer hunter himself Michael Jackson at The Rake, so falling off the wagon should be a fairly pleasurable and interesting affair too.
Posted by Eddie Grace at 18:10 1 comment:

A huge great hulking bear of a bloke has been banging on at me for several months about the Bristol Beer Factory.
I think he knows one of the people who work there, an even bigger chap aptly monikered ‘Big Chris’, and this is one of the reasons he’s such a fan. A resident of the hilly city, he also seemingly extols the virtues of Bristol to anyone who’ll listen.
More here
Posted by Eddie Grace at 11:13 No comments: 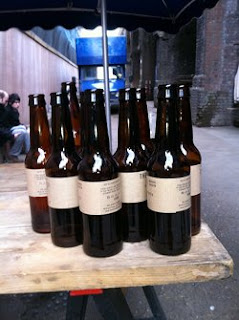 It was a cold coming we had of it. And an inauspicious start. We're late arriving at London Bridge and by the time we get to Druid Street, there are already drunks shouting loudly at passers-by.

So it's a brisk walk we embark upon to Monmouth Coffee House's roasting facility on Maltby Street, where we plan to fill up on Madeleines, croissants and strong coffee before the long tasting session that stretches out ahead of us at the Kernel Brewery.

The news that James is outside Borough Market's Monmouth Coffee house is greeted with no great surprise. But we don't have time to waste, so we pick our way past dusty metal fences and reclaimed cast iron radiators to the arch that houses what I still maintain is the best little brewery in the country.

Our opening sample is a relatively light 6.2% Citra IPA and it's despatched with some ease. James arrives and takes little time to catch up before we all opt for a stronger, more robust Black IPA, a collaboration between Kernel and Glyn, the manager of Borough Market's The Rake. It's deceptive in that it looks for all the world like a lively stout, but tastes like a the hop-laden 7.2% leviathan it is. We're already becoming carried away by the bonhomie, a feeling heightened by the bitterly cold temperatures that threaten to meld our reddening fingers to the glasses.

Next up is the new SIBA bottled beer of the year, Kernel's Export Stout. A smooth, chocolatey, oily brew that slips down like a gloopy black honey before plonking itself unceremoniously in the pit of your stomach in a style not unlike a just-swallowed medicine ball. At which point, we realise we're in trouble.

Yet we still have a long way to go. At least another five bottles remain on the menu and it looks like we're here for the duration.

Thick and fast they come. An Export India Porter carries us past two o'clock as if we were so many bags of silk. Evin O'Riordan, the brewing maestro behind Kernel, suddenly secures a few bottles of Coffee IPA from under the counter, which we polish off with glee. Then comes the formidable Small Imperial Stout at 9%, which briefly warms us enough to convince ourselves it's a good idea to have one more.

The final throw of the dice is the always excellent SCCANS IPA. It's not on general sale, but Evin's uncovered a crate out back that he happily cracks open for our willing mouths. It's still able to stand head and shoulders above the rest, despite the onslaught our tongues have endured over the last few hours.

But we succumb to the cold and retire to the Draft House. Bloodied, bruised, beered, but unbowed. Grinning massively and ruddy of complexion. Thanks, Kernel. We'll be back in May when the weather's better.
Posted by Eddie Grace at 17:27 1 comment: