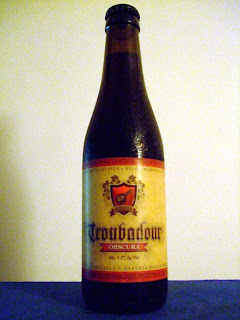 Imagine the scene. You're staring out at the moonlit vista that stretches before you on the feast of Stephen. Snow lays all about, deep, crisp, even. You get the picture.

Suddenly you hear a sound; a melody that keeps spinning round and round. Yes. Some drunken busker is playing Mrs bloody Robinson over and over again, but badly and with no recollection of the words.

Your winter idyll is shattered by this oaf, but being full of Christmas cheer, you invite him in for a quick nip, in part just to shut the bugger up. Busker takes full advantage of your hospitality, but is much more entertaining than he had been outdoors and you quickly strike up a rapport. So much so, that you end up down the local tavern in the early hours slamming tequilas and singing Delilah and Running Bear at the tops of your voices before being turfed out and waking up face-down in the snow several hours later.

This is how a night on the Troubadour Obscura might be expected to pan out. It's a winter ale this. It couldn't be more suited to winter if it were Jack Frost himself dressed in a tawdry Santa Claus outfit riding a donkey with lipstick on its nose and spraying fake snow everywhere. On an office Christmas party.

And being a winter ale, it's strong, dark and particularly handsome. It's designed to warm you on the shortest, coldest days, but the heat it imparts stays with you the next morning if you have too many, whereupon you'd pay anything to trade your head for a bucket of snow.

I've only got the one, which is disappointing. Would have loved to get into the method. 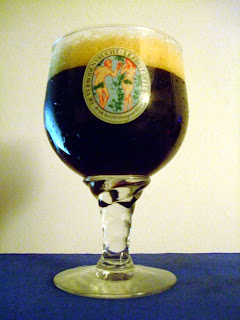 Beer: Troubadour Obscura
Country: Belgium
Strength: 8.2%
Colour: Mahogany brown
Smell: It smells of winter. Christmas cake, cheap milk chocolate and fudge
Circumstance: Tired out after a long weekend seemingly spent doing stuff I have to rather than want to. Think my catarrh's coming back too. Ace. Just in time for Christmas
Tasting notes: Gorgeous, fullsome almost buxom beer that grabs you by the nuts while smiling seductively at you. Long caramels and molasses caress their way lovingly over your tongue and scatter figs and raisins liberally around. It's quite like a fruit cake - definitely an acquired taste and occasionally you'll chomp on a raisin stalk, but rich, fulfilling and great with Wensleydale cheese. Slow, oily, gentle finish makes this truly a beer to savour.
Drinkability: Terrific. It's slipping down ever-so-easily.
Gut reaction: While I don't think there are too many horrors hidden within this ale, if there is flatulence produced, mark my words, it'll be complex.
Session factor: Low. It's strong in alcohol and viscous in texture. Handle with care and it'll warm you on winter nights, though.
Posted by Eddie Grace at 20:51