For those about to bock... 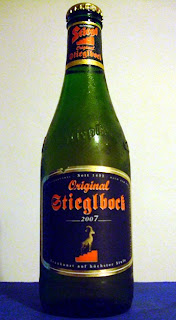 We salute you. Quite literally if you're going after one of these little pocket battleship beers.

I'm approaching this with a bit of trepidation as I'm still feeling the after-effects of a pretty nasty cold and, having just checked the bottle, I find that this innocuous-looking number weighs in at a robust 7%. There's an alert-looking ram or mountain goat or whatever on the label which looks as if it's contemplating jumping off the top of a staircase and I'm hoping this beer doesn't have the same effect on me.

This fellow hails from Austria and I'm ashamed to say I've never tasted Austrian beer, so I'm looking forward to it despite my misgivings over the strength. I've also never had a bock beer before, much to my chagrin, so again, there's a real sense of anticipation here. It's also been keeping outside in the rapidly-approaching-zero temperatures, so there's a satisfying condensation around the bottle that you may well be able to see from the picture.

The hope is that it's really nice and helps to clear my still suffering sinuses. The danger is, it could be disgusting and make me feel worse. That's the kind of dangerous game I'm playing for you all, you know. I bloody hope you appreciate it. 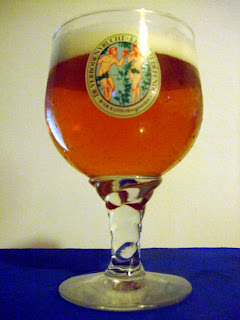 Beer:Stieglbock
Country:Austria
Strength: 7%
Colour: Light, golden, lager-coloured. This worries me.
Smell: Disappointingly lager-ish. Like stale stubby bottles of Kronenbourg that you get in France. But with substantially more potency.
Circumstance: In need of warming up after a lengthy walk back from East Dulwich, having completely failed to remember to get off at my stop.
Tasting notes: From the look and smell of it, I'm expecting it to taste like really strong lager, but it doesn't. It's reminiscent of Duvel, but less cloyingly sweet and bubblegum-like. Rather it has a really sharp fizz initially, then almost a smoky, rounded taste as it washes around your mouth. I'm not detecting much of a finish - there's a touch of grapefruit maybe - but what it is doing is bubbling through my nose and making it easier to breathe. Sod Tunes or Lemsip, I'll have this if I'm trying to get rid of a cold in future. I'm really impressed with this. It's a beer of real character that promised so little to the eye and nose. Unassuming, it delivers more than you'd bargain for. An Austrian trait, perhaps? I bet it skis well.
Drinkability: Oh, really easy. Dangerously so. I'm halfway through it in no time and genuinely already feeling the effects.
Gut reaction: A bit gassy but not prohibitively so - you could get away with ploughing through quite a few if you were dead set on it. Having said that, less than half a pint has made me belch already, so go easy on it.
Session factor: No chance. Forget it. You'd have to be a certifiable lunatic to attempt a session on this stuff. It's really potent.
Posted by Eddie Grace at 20:25

Appreciate the risky game you are playing with your health in our name, Ben. Another cracker. I've passed the blog's URL on to my mate Zak the Beer Boy.