The crate and the good 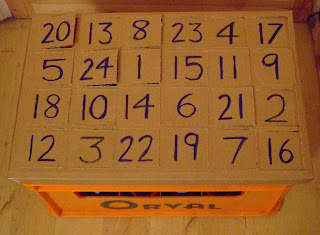 Well that was an unexpectedly laborious faff. Thought I'd make it easy on myself this year by picking 'London brewers' as the theme. You know. Close to home and all that.

But it's taken the best part of two weeks to pull this little lot together. I've been north, east, south and even a bit west to lay in the ingredients for this year's calendar. Hell, I've even been to Brighton. Up a ruddy steep hill at that.

I'd like to say that was the difficult bit, but it wasn't. No. Finding a crate was no mean feat, so thanks to Theatre of Wine in Tufnell Park for the kind loan of the rather fetching orange Orval one above. But the real bind was making that seemingly unimpressive number matrix above. It might not even be a matrix, but I want to give it a complicated sounding name because that was a right bugger to make. Looks like it could have been knocked up in minutes; in reality it took me three hours.

Each one of those little flaps was meticulously scored out with a fairly blunt Stanley knife and there was more than one occasion I nearly sliced the end of my ruddy fingers off.

That said, it's pretty bloody impressive, isn't it? Big grin on the face when I finished it and posted it up. Now all I've got to do is drink the contents.

Beer of the Roses

Someone told me it had been August since I last updated this blog. They were right. Unforgivable sloth. I assure you I have been drinking beer, but writing about it has seemed pointless. But no more. Because someone suggested a beer fight. What could be more worthy than that?