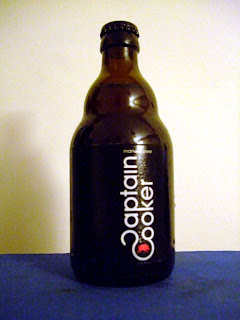 I realised earlier this afternoon that I've been playing catch-up this week and still haven't managed to get to where I need to be, so it's possible I'll get through three tonight and be back on track.

There again, it's possible I might chicken out, 'cos I've pulled out another one of those Flying Dog beers and, after the last one, I'm not looking forward to it.

Course, this one looks well weird, with its stubby style, Kiwi influenced 'all black' bottle and its odd name. For all the world, it should be from New Zealand. But, no, it's from Belgium.

Hats off to the Belgians, they've gone out of their way to wipe out any trace of their home country from this beer, for reasons not entirely clear. According to the label, this ale combines the finest brewing traditions of Belgium with the natural goodness of manuka leaves fresh picked from the native forests of New Zealand. Bollocks is it. Tesco's own-brand 'Easy Manuka' more like. Or rather, I suspect as much. 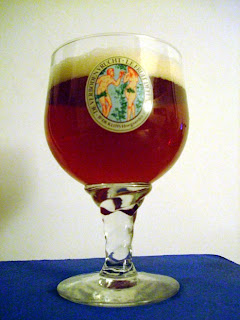 Beer: Captain Cooker Manuka Beer
Country: Belgium
Strength: 5.7%
Colour: Dark amber - bit like the stuff the fly or something was trapped in off Jurassic Park
Smell: Flowery and fruity, with a worrying undertone of Johnson's hand cream and powdered milk
Circumstance: Staying in, looking after the kids, just got the teething one back off to sleep after she woke up just as the eldest was drifting off. Gnnn. Need a beer. Yes. Need. No food yet either, although I had a big, late lunch. And plenty of gratis chocolate courtesy of one of our photographers at work.
Tasting notes: Not a great deal I can put my finger on here. Not that it's tasteless, just a mite nondescript. It's fairly light and fragrant, with gentle sherberts dappling your tongue like sunlight kissing red-clay walls through Eucalyptus tree leaves. Actually, dare I say it, it's a bit lightweight. After the initial promise, there's not a lot holds the rest of it together. So what's a reasonably intimidating bottle and initial burst of life fizzles out like so many All Blacks' World Cup campaigns. They've done well, these Belgians.
Drinkability: Despite being relatively innocuous, I just wouldn't want all that many, although it is perfectly easy to drink.
Gut reaction: Belch-inducing. You can't have all that sherbert dappling without a build-up of stomach gas.
Session factor: OK, I suppose. You could neck a good amount without being overpowered.
Posted by Eddie Grace at 20:50