Brugge me, is that the time? 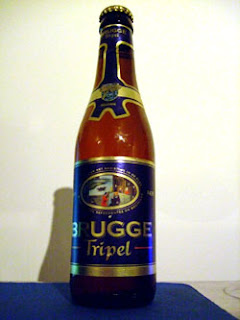 Two of the possible side-effects of cumulative strong ale drinking are a dulling of the memory and an inability to quantify the passing of time. Rather like the 'cake' of Chris Morris's Brass Eye, long-term, regular exposure to beer seems to play havoc with Shatner's Bassoon, which as is well documented is the part of the brain that deals with time.

And it's with that obfuscating, somewhat puny and frankly implausible excuse that I round off last year's Beer Advent Calendar and usher in the genuinely mouthwatering prospect of another one in 2009. 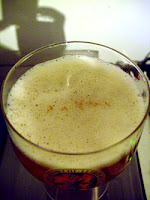 You'll be delighted to hear there's a fine coating of dust around the bottle I've left for almost an entire year to drink. It dates it quite satisfyingly, I think. Almost as if I've laid the beer down to mature and just fetched it up from the cellar. More worrying are the light tan specks I can see on the head after pouring that have the faintly worrying appearance of the spillings from someone's ham-fisted cigarette-rolling attempt.

I'm not expecting this to be easy, because it's a Tripel and I know they're for sipping gently and all that. Unfortunately, a part of me wants it over with quicksmart, so I'm going after it like a terrier after a sewer rat. 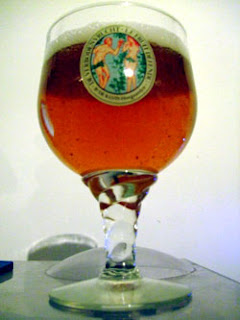 Beer: Brugge Tripel
Country: Belgium
Strength: 8 point bleedin' 7%
Colour: The dark, unappetising gold of stale lager
Smell:Wet hair and melting plastic
Circumstance: Halfway through a ruddy hard week at work
Tasting notes: The fizz of a thousand stinging nettles followed by the crunch of a large oak being rammed insistently down your throat. It coats the inside of your mouth with a thick film of glowing, treacly, sour oranges and cheap sherry. This lasts for some time, so that you're almost afraid it'll never go away.
Drinkability: Like pushing herded water-cats uphill with a fork
Gut reaction: As Nat King Cole once sang: "There may be trouble ahead..." I burped after the first mouthful and there's some filthly looking sediment lurking in the depths.
Session factor: Negligible. I'm still debating whether to finish this.
Posted by Eddie Grace at 21:25 2 comments: