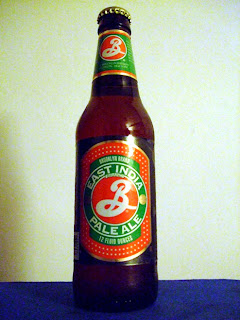 It's been a tough few days in the Beer Advent Calendar, especially after yesterday's abomination of a beer, so it was with some relief that I pulled an IPA out of the crate today.

I say today, but it was actually Monday. I'm playing catch-up and I think this one was due to be opened at the beginning of this week. Maybe. To be frank, it's all a bit of a blur. I'm enjoying the beer, mostly, but the pressure of one-a-day is beginning to tell. Having to catch up on an entire weekend in the week before Christmas when social gatherings abound is a pretty strenuous exercise. But it's a curse I'll bear and I'm sure to come out the other end smiling.

And smiling was what I was doing when I saw this wasn't some inaccessible, ill-thought through novelty beer but a solid, dependable IPA. OK, it's from the USA, but let's not hold that against it. Our cousins over the pond are turning out some extremely respectable beers (apart from that godawful porter I had to drink the other week), so I'm interested to see their take on the beer first brewed in the 19th Century with the aim of getting from England to India via the Cape of Good Hope in one piece.

Staying in one piece might be a problem this evening, though, after seeing how strong this little beauty is. No pussy-footing around with five point something like many IPAs do, this one scales the heights. But is 6.9 a bridge too far for the Brooklyn ale? 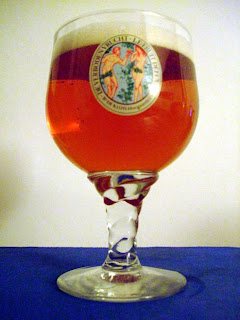 Beer: Brooklyn Brand IPA
Country: USA
Strength: 6.9%
Colour: Copper-barrel orange
Smell: Fruity. I'm almost convinced that's pineapple.
Circumstance: Just before bedtime after a long day at work, shopping, tidying up, putting the shopping away and clearing toys from the lounge. I haven't even eaten yet.
Tasting notes: This is a good example of an India Pale Ale. There's a sudden wash of bitter fruit and bubblegum at first, but the rounded taste is cut through by a large dash of grapefruit that stays with you for some time. It's sturdy is what it is. Not overly complex, but enough going on to keep you interested.
Drinkability: Good, but not easy. IPAs are often on the strong side, but this tips the scales at nearly seven per cent, so proceed with some caution or face the consequences.
Gut reaction: So far so good, but I wouldn't like to test my stomach's resillience with more than two or three.
Session factor: Not especially good. It's too strong for glugging back with abandon, but you could shift three easily and move on to something less challenging afterwards.
Posted by Eddie Grace at 21:44