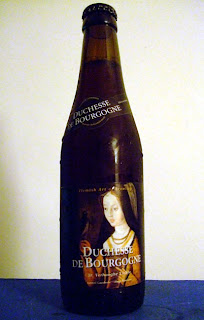 It's been a bit hectic tonight, what with getting home and pitching straight into the kids' bedtime routine, then cooking a monster curry. I wasn't even sure I'd get time to do this, so when this little beauty came out of the advent calendar, it immediately brought a smile to my face.

I'm not sure if you can make it out from the picture, but there's a well-dressed lady of some standing on the bottle, with a bird in her hand, painted in the Vermeer style. Something about it brought to mind oak-panelled Dutch gin houses and cold winter nights, which apart from the oak, the Dutch and the gin house, was pretty apt.

The label has a Surgeon General's health warning on it, so I shan't be having any of this if I get pregnant or intend to operate machinery, and it also informs me that the beer is 6%, a few clicks weaker than the first few I've pulled out of the crate so far. This is a good thing. I'm tired out after a long week spent fighting off illness, so I need something a little less harsh on the liver. 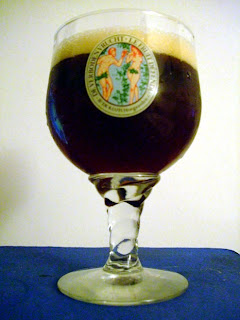 Beer: Duchessee De Bourgogne
Country: Belgium
Strength: 6%
Colour: Russet
Smell: A combination of fine Amontillado sherry and strong, traditional cider. There's also a whiff of oak about it.
Circumstance: Just about to eat a curry I've spent two hours crafting.
Tasting notes: Sugar, caramel, cinnamon and apple combine at first. Then the sharpness hinted at in the nose swirls round your mouth like a whirling Dervish, but this relents shortly afterwards. Savoury finish rounds off what is a distinctly fantastic beer. It reminds me a bit of Faro, the beer, not the Portuguese town of the same name. But it's superior in almost every respect. The label tells me it's a blend of eight month and 18 month-old ales that were matured in oak casks, which marks this out as a beer of aristocratic stock. The Rodneys would definitely be queuing up, God forbid.
Drinkability: High. I'd bet you could go around for or five of these in any one sitting and still have room for something else. It's gone rather well with the curry too, maybe as a result of the sharp fruitiness.
Gut reaction: This is where I think this one falls down. It's fairly fizzy, though not too much, but I've a suspicion the cider-like qualities don't stop at the aroma and initial taste. Verdict: take it easy or you'll likely be pebble-dashing the porcelain.
Session factor: It's 6%. Could you go a session on 6% beer? Not sure I could, but given it's drinkability, I might be tempted. In the right circumstances and company, of course.
Posted by Eddie Grace at 21:23