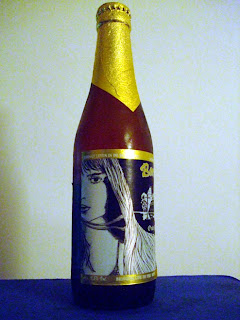 Having had to play catch-up for most of this month, I'm now getting ahead of myself. As in love life, so in beer. Or something.

Although by the time I post this it will, strictly speaking, be 23 December, so there's nothing underhand going on, I assure you.

It's the works Christmas do tomorrow, so there's no earthly way I'm going to be updating tomorrow evening. Even if I tried, my tastebuds will have been burnt-out by cheap house red, no doubt, so it really would be a fruitless exercise. Amazing the lengths you'll go to in order to justify another ale, no?

The one I've pulled out has got 'depth-charge' written all over it. I doubt it'll taste all that strong and is in a small bottle, but by the time it reaches the requisite depth, it'll be ripping my resistence to shreds and kicking me right up wazzed alley. It's a beer with a strapline too, to wit, bringing life to the brew.

And according to the sleevenotes, by drinking this, I'm contributing to the revival of the traditional Old Gueuze. I suspect that's lost something in the translation from the Flemish and what it actually means is you'll go after any old boiler. Ah well, time to dip the toe in the water and see. 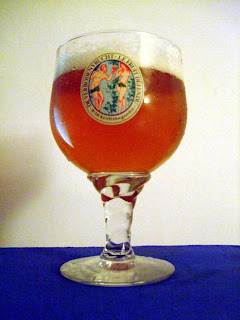 Beer: Bersalis Oud Beersel
Country: Belgium
Strength: Fucking 9.bastard5%
Colour: Menacingly strong lager-coloured
Smell: Like a fired cap-gun mixed with watered-down orange juice.
Circumstance: Listening to King Rob on Purple Radio and actually beginning to feel a bit festive. It won't last, of course
Tasting notes: Mummy. What is the big bad beer doing? It's scaring me. What starts out as a seemingly pleasant walk round a lake in the park soon turns into some kind of teen-slasher creature from the black lagoon hybrid. With some ninjas thrown in for good measure. Teen ninja-slashers from the black lagoon. I've had one sip and already my mouth feels glued shut. Like I'm trying to scream, but can't and all the while, the bogeyman plods relentlessly towards me. I'm trying to run away but I'm wading through treacle. And there's plenty of that involved here. In fact, this is quite unlike any beer I've ever had before. The first bit is like a strong beer, but then it appears to club you round the head with a lump hammer. I can actually feel myself get pissed on it. Freaky.
Drinkability: Peanut butter.
Gut reaction: I can only speculate how much havoc this will wreak.
Session factor: Ha. Don't make me laugh.
Posted by Eddie Grace at 23:45

great stuff ketsy. sorry for the delay but have been mega busy at the shop for the last couple of weeks. have now added a link from whiskyforeveryone, so hopefully you will get some hits from us. are you going to keep writing this? i think you should cos its great! also, thanks for your comments on my blog. cheers mate and see you soon.