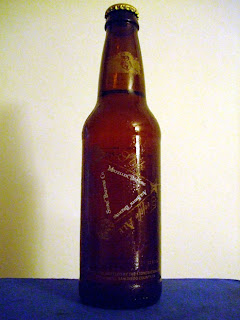 This is the third US beer I've had in as many days and I'm beginning to question the wisdom of chosing so many for the calendar. Maybe I was still feeling a rush of euphoria post-Obama victory?

Whatever the reason, the results have been mixed, as I believe I said a couple of days ago. Still, on balance, I think they've been more good than bad, so that's got to augur well.

Have to say I much prefer the bottle design of this lot. Subtle and understated, both qualities highly treasured by our American friends. If the beer is even as good as the last one, it'll be 10 times better purely as a result of how it looks in the bottle. Note to Flying Dog: Ralph Steadman pictures on a bottle do not an impressive beer make.

Watch as I fall flat on my face because this one tastes rank. 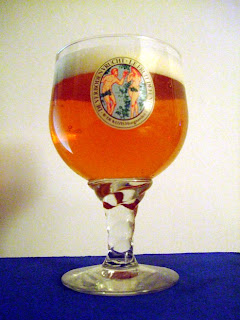 Beer: Stone Brewing Company Triple Ale
Country: USA
Strength: 8.7%
Colour: Gorgeous golden slumberous. Not remotely lager-coloured. No
Smell: Fresh, like summer meadows. I can detect ruby red grapefruit
Circumstance: Just eaten, so could do with something that will aid the digestion
Tasting notes: Sharp and grapefruity at first, this beer delivers around 10 different flavour sensations as time cleans glasses, wipes the bar, calls last orders and wears inexorably on. I can pick out pear, bubblegum, biscuit, sherbert, gooseberry, lemon and even a touch of chilli. A really fulfilling beer, well brewed, neatly presented and stuffed to the gunwhales with complexity. Good effort, Stone Brewing Company. You can come again. Leave the flying dog outside, though.
Drinkability: Like the Stones of old, it goes down great.
Gut reaction: Doesn't feel like it'll cause too many ructions, but I'll reserve judgment until I wake up tomorrow. This is a hefty beer.
Session factor: Only marked down because it's so strong. In fact, there's no way you could have a session on this stuff. You'd last barely three before falling over.
Posted by Eddie Grace at 22:11