There's nothing like revisiting a former haunt to get the nostalgia juices flowing.

Early arrival in town to meet people I haven't seen since the late '90s affords me the opportunity to reacquaint myself with The Lamb in Lamb's Conduit Street, WC1. This was my favourite pub for years, first chanced upon after an all night rave in the early '90s, up until Young's was taken over by Charles Wells and ruined its authenticity.

You used to be able to get Old Nick in here on tap, if I remember rightly. Now you can get Bombardier. Great.

But some innovations must be applauded and one of these is the three-glass paddle. What's that, you say? Quite simply, it's three one-third pint glasses with a different beer in each, inserted into what looks like a cross between  a three-leaf clover and a table tennis bat. With holes in it for the glasses, of course.

The three I go for are Sambrook's Wandle and Junction and Young's London Gold. The Wandle is light and fairly crisp, but almost too much like a lager for my liking. But the beauty of this system is that there's only ever a third of a pint to get through, so really there's little to worry the discerning drinker.

Young's London Gold is a feistier affair that snaps like fire-crackers on your tongue. But they're cheap ones bought at Lidl, so there's genuine disappointment when the flavour runs out quickly.

Junction's the heavyweight among them, bowling into you like a lummox stumbling down Lavender Hilll on its way to the station. It's one you'd usually take your time over, especially in pint form, but with the smaller measure, it's much more manageable.

Unfortunately, none of these ales has really hit the mark. Maybe it's because they haven't had time to state their cases before I moved on to the next.

But no matter. The three-pint paddle is a great idea and I giggle still at the memory of carrying it to my table from the bar. You wouldn't want to do it if the place were packed like it usually is, although if they carry on diluting this once fine boozer with unwelcome additions like Courage Directors, then that might not be too much of a problem in future.
Posted by Eddie Grace at 15:29 No comments: 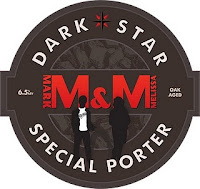 Sometimes, first impressions are misleading. Just over a week ago on this very site, I damned a pub relationship as doomed. Unsalvageable. Pretty much dead in the water.

But there are times when you have to admit you were wrong about something. Maybe you didn't give it a fair crack or were too quick to judge.

So reeling from my wrongness about Brew Dog and all their beer (sorry guys - Riptide is really quite nice), I'm forced to eat my words about The Crown in Southwark. I hold my hands up. I'm sorry. I was wrong about you. I was being hasty. Can you forgive me?

I'm afforded the opportunity to revisit the place when I hear they've got Dark Star M&M Special Porter - a collaboration between beer writer Melissa Cole and head brewer Mark Tranter - on the pumps. This is a big, singed plum pudding of a beer. Heck, it's almost a full meal, which is handy as it's lunchtime when I decide to try it out.

A smoky spirit-like smell greets you as you raise the glass to your face. First sip delivers a full, smooth flavour that pushes the smoke to the background as your tongue is then overwhelmed by a marauding gang of fruit-laden fullness. The gang proceeds to pour Cognac liberally about the place before casually tossing a lit match into the resulting tinderbox and watching it burn, giggling as it does so. Cinders linger until doused by a raisin fire hydrant and you're left to savour the smoky embers. Magnificent.

Chatting to the Crown's manager, I discovered a real passion for the beer he sells, the plans he has for the place and the philosophy that will shape it in future. And I fancy it. Not only is The Crown dedicated to stocking a wide and ever-changing variety of locally brewed ales, it's also changing its standard range of taps to run a more eclectic range. This will include two given over to beers supplied by Utobeer in Borough Market, supplier extraordinaire to this calendar.

Brewer nights and talk of sister pubs elsewhere fuel the burgeoning passion. So goodbye doubts and awkward silence. We're not going to be 'just good friends'. I've changed my mind about you.

This could well be the start of a beautiful relationship.
Posted by Eddie Grace at 18:06 2 comments: 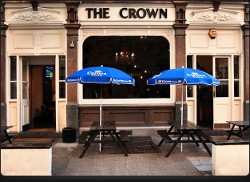 At the great risk of sounding like Swiss Tony, going to a new pub is very much like going on a date for the first time.

You're naturally excited and want things to go well, but wary too. Worried about how things will turn out, whether you'll get on, if there'll be any awkward silences. And as with anything new, you wonder if you'll actually like it or whether it just won't be for you.

That's how I feel as I walk into The Crown in Southwark, a newly converted place on Blackfriars Road that promises much. All the ingredients are there from the outset. Three real ales on tap, large beer garden, reasonably interesting kitchen. But as with the date, there's a crashing sense of disappointment when it doesn't pan out quite how you'd hoped.

Perhaps it's just too new. Maybe it's the way the barmaid didn't quite understand your order. Could be just that the beer garden was closed when you wanted to sit outside. Whatever it is, it hasn't done what I'd hoped and, sadly, it appears I'll have to look elsewhere.

It's almost gutting, as I thought it could be so much more on first glance. Just what I thought I needed. A diversion from drudge and the crap life can sometimes throw at you. A ray of light in an otherwise dark, dingy January. But it's not going to work out between us.

The pub has extended a cold shoulder where a warm embrace would have been more welcome. In all honesty, it did seem too good to be true at first. But in the event, it felt as if all it wanted was my attention, fleetingly at that, then was quite happy to cast me aside for what it felt were clientele more deserving of its affections. And it's difficult to put my finger on why. Perhaps I betrayed too much enthusiasm up front? Did I want it to work out too much? Did it just not like me?

No matter. There are always other pubs. Now some would say it might need more time, but sometimes you just have to admit something isn't going to click and just move on. The beauty of pubs is that their characteristics and general feel can change, so perhaps that's where the date analogy falls down.

Maybe I'll be back in future to give it another whirl, but for the moment, The Crown, that's all you're having from me.
Posted by Eddie Grace at 21:19 No comments:

Beer through the year

Time and the need to fill it with something approaching enjoyable means I'm going to keep the Beer Advent Calendar going for the rest of the year.

An eventful December pretty much confirmed all I'm really any good at is drinking and talking rubbish about beer. So with a long, likely painful year stretching out ahead of me, I've decided to continue posting about the beer I drink until it's time to do the actual calendar again.

Updates will be in a range of formats. If I'm down the pub, it's unlikely there'll be a 'live' picture as my phone camera is utterly useless. But home drinking will mean you get a proper picture to look forward to. Having planned to do less of this, though, it could mean I need to invest in a new point-and-click.

Some days, it'll just be a link to the excellent Caught By The River website, which carries occasional reviews of beer I knock out every so often. See below for the format (clue: the link is in the caption).