A Flemish beer for a phlegmy evening 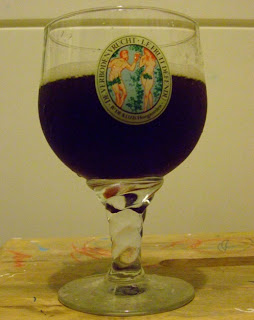 Beer:Rodenbach
Country: Belgium
Strength: 5.2%
Colour: Muddy, dark and filthy-looking. Like a pond you wouldn't fancy falling into.
Smell: Like lettuce soaked in a vinaigrette dresssing that's more vinegar than ette.
Circumstance: Exiled to the kitchen while the missus tries to sedate our miscreant youngest with breast milk in the lounge.
Tasting notes: Smash. A great acidic burst not dissimilar to lemon fizz bombs marmalises your taste buds as you take in this complex brew. The sleevenotes claim that a quarter of the beer is aged for two years in oak barrels, then added to the newly brewed stuff before bottling. There's a definite hue of poor-quality wine as you open the bottle and that theme is continued as the effervescense subsides. Fruitiness comes in the form of a large portion of sour cherry that's lovely and sharp. Just before the flavour disappears, you get a mild pinprick of sherbet that almost dries out your tongue and leaves you reaching for the glass again.
Drinkability: Really terrific. Perfect as a summer quencher, when it could down a thirst at 50 paces with its zesty potency, but equally at home as a refresher after a long autumn day spent chopping wood and raking fallen leaves.
Gut reaction: More than three and you're probably tempting dispeptic fate.
Session factor: Not really a session beer, since it's a bit too rich and fruity for sustained drinking.

Fruity beers aren't usually my bag but you make this one sound interesting.

Funny you should say that, Sam, as I specifically asked for no fruit beers for pretty much the same reason. But the guy in the shop said I ought to give this one a whirl and he was spot on.