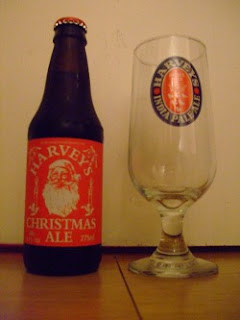 So that's it then. All over for another year. The last bottle has come out of the crate, which is now looking all forlorn and empty, and the annual beery journey is almost at an end.

Hell of an undertaking that it is, there's always a touch of sadness come Christmas Eve when it's time to finish off the calendar, put the crate away and wait till December rolls around again. It doesn't half take its toll on you as well, both in the untold damage it does to your liver as well as the huge strain it puts on your ability to come up with different descriptions of highly similar colours, for example.

Still, I can safely say this year's calendar has been by far the most interesting to work on since I started out in 2007. December has been a memorable month for all sorts of reasons as the last vestiges of civility have been wrung out of an already frosty relationship. There have been some pretty nasty moments recently, all very undignified, but I guess you'd expect that at this stage. Hopefully January will bring some more definite news about living arrangements and we can start moving on from this.

But despite all the nonsense, I've still had an amazing month, not least due to the really impressive quality of the beers I've tasted. While one or two were disappointing, on the whole they've been of a high standard, making my job much more pleasurable.

Highlights have included the Great Divide Hibernation Ale, the Chimay Tripel, the Anglers Pale Ale, the Hertog Jan Grand Prestige and the Dogfish Head Indian Brown Ale. But top of the pile this year was the Kernel Imperial Stout. Such a good beer it's difficult to know where to start. Wonderful smell, huge taste, strong as an ox. It's not just a drink, it's a genuine experience. Definitely a beer fit for an emperor and a worthy Beer Advent Calendar champion.

So an interesting and varied box this year. Let's hope the last one doesn't let us down. 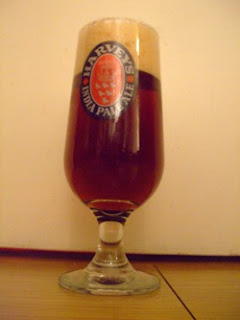 Beer: Harvey's Christmas Ale
Country: UK
Strength: A nice rotund 8.1%
Colour: Christmas crimson and old wooden furniture.
Smell: Pudding, fortified wine, pine trees and chestnuts roasting on an open fire. You get the picture.
Circumstance: Musing on where I'll be and what I'll be doing in a year's time.
Tasting notes: What we have here is Christmas spirit in a brown bottle. The cheery, rosy-cheeked Santa on the label gives you a clue as to what's inside and the smell lets you have a hint of the taste to come. But taste, and you'll soon imagine you've just bitten into a rum-soaked brandy snap following a huge Christmas dinner. It's a dessert course, for sure, as tiny cluster bombs of liquid icing sugar explode all round your mouth like incendiary sugared almonds. And like many at Christmas, you almost feel about to burst through over-indulgence. Fortunately, some kind soul brings in the Stilton to offset the sickly sensation and that scatters just enough salt to clear the path for more.
Drinkability: Not great, in all honesty. I'm struggling here as it's too cloying and full bodied.
Gut reaction: Pleasantly surprising. It's like the beer equivalent of a sweet digestif.
Session factor: Piddling. One's hard work, never mind several. It'd be good with strong cheese like a dessert wine, but otherwise, I'd steer clear.
Arbitrary score: 6.8
Posted by Eddie Grace at 20:13

Well done on making it to the end of the crate Kets - a sterling effort as ever.

Happy Xmas my arse, 2011 is around the corner - onwards and upwards!

Cheers, Mark. Hope you had a good one and see you down the Kernel Brewery soon.