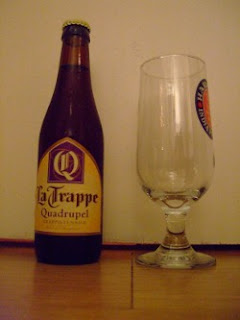 Today has been a tough day. Without doubt one of the hardest in the history of the Beer Advent Calendar and definitely one of the most difficult in my recent memory.

It didn't start well. A longish taxi ride home went sour within moments as the Sat Nav sent us down a long, snow-covered road into a dead end. I managed to sneak five hours' sleep before rising, still none the better for the rest, and prepared to head out into Frozen Britain again. My mission? Pick up some provisions from Sainsbury's and purchase a Christmas tree.

Fuelled with strong black coffee and a solitary mince pie, I set out on my quest, quickly realising it would be much harder than I'd bargained for when I took a tumble on the front steps. Slow moving traffic should have been the second warning sign, but I was in such a spin I didn't realise. Until too late. A packed car park meant what should have been a five minute quick-and-dirty visit to the supermarket ended up an hour long trawl through an army of anxious last-minute shoppers.

Getting the tree was just as bad. Is it me, or has the price of scrawny-looking pine rocketed during the last few years? I swear you could get a tree the size of a house for less than a tenner at the turn of the millennium. Not so now. So what appears nothing more than a fat upright branch has set me back the best part of 30 quid. And I had to shop around for that particular bargain too.

But by far the most tricky task of the day has been presented to me now in the form of a bottle of La Trappe Quadrupel. I can't begin to describe how low my heart sank as the unmistakeable Gothic font Q stared up at me from the top of the bottle; a beery gauntlet slapped around my face and thrown to the ground.

In my present state - barely able to keep my eyes open - it's foolhardiness to attempt this. You see the sacrifices I go through to keep this thing up to date? 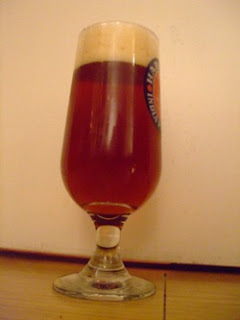 Beer: La Trappe Quadrupel
Country: Belgium
Strength: A totally unreasonable 10%
Colour: Murky brown like the frightening eddies of the lower Thames
Smell: The sweet, cloying aroma of sodden honeysuckle
Circumstance: Coming to the end of a long, hard day of recovery, sitting in an armchair, watching the darts and admiring the Christmas tree.
Tasting notes: Oh, what have I done? This is sure to end in tears. It tastes genuinely toxic, with an immediate overpowering kick that feels for all the world like you're going down under the influence of chloroform. A sickly sweet baclava coats the inside of your mouth, finding every one of that orifice's nooks and crannies and burrowing its way in like bichos de pé (if you're not a fluent Portuguese speaker, use Google translate). Then something strange happens. Instead of hanging around like a substance whose decay is measured in half-life terms of at least 20 years, the beast rears like a spitting, striking cobra and stings deadly venom into your tongue. Mercifully, the pain is short-lived and the paralysing effect quickly takes over.
Drinkability: Not that bad, considering it's like having a third of a bottle of wine in a refreshing, effervescent format.
Gut reaction: Unsure. Under normal circumstances, it might not be too much of an issue, but on the back of last night's excesses, there are some deeply strange sounds coming from the bowel region.
Session factor: If you're used to quaffing the venom of a thousand serpents, fine. Otherwise stick to one.
Arbitrary score: 7.5
Posted by Eddie Grace at 21:24