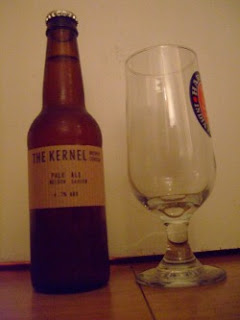 With apologies to Ride Committee featuring Roxy, but the combination of what sounds like a Cluedo character with a room in a house begged the reference.

And given the fact when I post this, I'll be up to my neck in dancing loons, it seemed even more appropriate.

I'm delighted it's one of Kernel Brewery's beers, though. If there was ever a beer that wouldn't be too much hassle after already tasting two for the calendar already this evening, it would be something finely crafted by Evin, a knowledgeable and friendly south east London beer artisan.

He's evidently a fan of pale ale, since he brews about four or five varieties. I've already sampled one in this calendar and it was pretty sensational, so I'm really looking forward to seeing what this one's like. 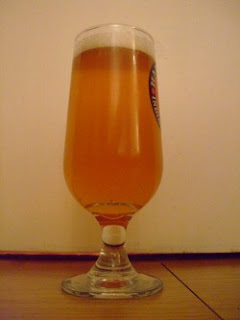 Beer: Kernel Brewery Pale Ale
Country: UK
Strength: A placid 4.7%
Colour: Cloudy tangerine
Smell: Beastly skunk. Again. I swear this man brews beer from hybrid marijuana.
Circumstance: Moved on from morose and into American folk in the form of Arlo Guthrie. When you read this, I'll be off my crunk on cake or some such.
Tasting notes: King of grapefruit, Lord of citrus, conqueror of the holy lime of Judah. I'm not sure you could cram any more citrus in a drink if you tried. As it's at the weaker end of his usual output, there's more upfront fruit involved here, but it's not long before the intense bitterness mauls your tongue like a big bag of ferrets listening to a mid-eighties Elvis Costello album. You really have to stand back and admire the sheer ferocity of something so innocuously named. If you've ever tasted the intense pain of infidelity or unrequited love, I don't need to tell you how long the crunching, crushing clasp lasts. More fortunate readers can just go and taste it for themselves.
Drinkability: I've had a few beers this evening, yet I could merrily carry on were more of these available.
Gut reaction: I'll be happy if I survive the night intact as I've mistakenly spilled some of the sediment into the glass. Who knows what untold havoc this shall wreak.
Session factor: Good. I'd love to tackle a few on a summer evening, but it's equally at home spicing up a cold winter night while your bored at home.
Arbitrary score: 9.1
Posted by Eddie Grace at 16:35