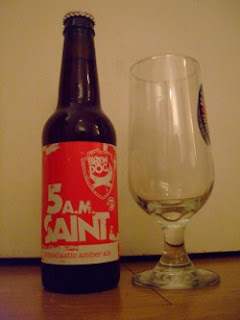 You give me Brew Dog Saint five in the morning. With massive apologies to Paddy McAloon, who wouldn't have had any idea I'd nick and bastardise the chorus of the opening song on possibly Prefab Sprout's finest LP in order to introduce a beer review.

But bear with me, Paddy. And the rest of you. For I will bend Heaven and earth to link the two in a wholly tenuous way that has most sane people raising their eyes skywards in disbelief and, quite probably, dismay.

This evening's offering is by Brew Dog, a company with which I have a few issues. Now I totally understand what they say they're trying to do and, in a way, we're coming at beer from similar angles. Perhaps that's what rubs me up the wrong way. Readers of the excellent Caught By The River website may have seen my review of Brew Dog's Tactical Nuclear Penguin some months ago, at the time dubbed the strongest beer in the world. Which was essentially a dick-measuring competition with a German brewer in which our pals at the Scottish brewery eventually invoked references to World War Two. Great work, guys. Why not pick one of the greatest human tragedies of our time to try and flog beer?

I know they're trying to wipe away the stuffiness of beer and bring it to a wider, less Fairisle jumper-wearing crowd, but doing the beer marketing equivalent of chanting Two World Wars and One World Cup is frankly crass at best and downright distasteful at worst. Much like the beer itself, in my opinion. I'll give them Punk IPA X, but otherwise they can really go and whistle.

So opening the calendar and seeing this garish red bottle staring back at me has genuinely got me itching for an argument. Given there's no one else here, it'll have to be with the beer itself. Now I freely admit to having bought it with the express opinion of giving it a proper kicking, but on reflection, that's really not the Beer Advent Calendar way. It'll have to work hard for a good slagging off, I reckon.

Which brings me back to Paddy. In many ways, Prefab Sprout mirror Brew Dog. Positioning themselves outside of the mainstream, they started out with the lofty intention of making what was extremely sophisticated palatable to the hoi polloi. Their first effort was hit and miss but had some inspirational moments. The second saw them break in to the big time with something warmly received by the critics. But once that fine line had been crossed and they were the name on everyone's lips, they lost sight of what it was they were trying to do.

I have to add I know nothing of Brew Dog's owners or marketing department, so if they're genuinely lovely people, I apologise wholeheartedly to them and would maybe, at a push, buy them a pint. But your schtick cuts no ice here at BAC towers, as I expect is the intention all along.

Poor old Paddy is now almost completely deaf due to some kind of weird rare brain condition and can no longer hear his own output. There's a lesson in there, guys. 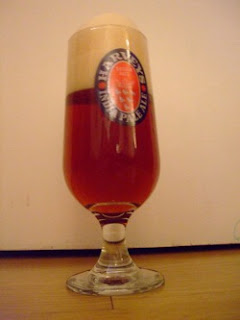 Beer: Brew Dog 5am Saint
Country: Scotland
Strength: Bog standard 5%
Colour: Conkers. But when poured, it looks like an ice cream float. A beery Mount Eiger erupts from the glass. It looks like a chess piece.
Smell: Suspiciously like last night's beer. Citra hops in abundance, maybe. Whatever. It's Skunk Anansie.
Circumstance: Just back from a pleasant evening out in Smithfield with Whisky4Everyone founder Matt Chambers and friends. And a ruddy cold journey home on the bus. Now listening to Steve McQueen.
Tasting notes: Billed as an iconoclastic amber ale. Oh it would be iconoclastic, wouldn't it? Exactly which icons is it breaking down, then? Discuss. I had to bite the head off it, such was the volatility when poured. It wore a pith helmet of froth that tasted like someone had just washed their week-old socks in it. And here's the thing. For something that smells so much like the Kernel before it, the taste just doesn't stack up. There is no rounded, well-crafted balance. It just stinks. Everything's here, but it just feels badly put together. It's sharper at first and the hops scream at you like you're about to steal its ice cream. There is a brief hint of what could have been after the screech subsides, but you're whisked away to the flatline finish way too quickly. And it's a sour finish, not a slow, lingering kiss that anticipates the next.
Drinkability: Beers like this are supposed to make you want more, but this doesn't. I'm disappointed. When I smelled the just-opened bottle, it promised more.
Gut reaction: Questionable in the extreme. After three glugs, I did a fart that sounded like the opening bars of the 'Go Compare' advert
Session factor: No interest.
Arbitrary score: 3 (given before I even touched a drop) 5.3 after tasting. Could do better. I genuinely believe they really could do much better, which is what's worse.
Posted by Eddie Grace at 23:48