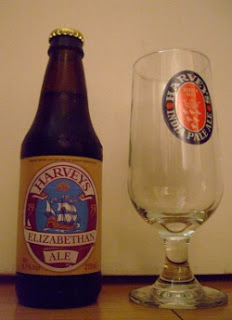 An unholy alliance rules the nation, Britain is crippled by freezing conditions and I just had to run a system restore on my laptop for the fifth time in as many weeks.

Throw in a marriage breakdown, the impending return of a filthy cold and the busiest time of year at work and it all seems utterly pointless.

But then it's 1 December, Mad Men will soon be screened on BBC4 and the Beer Advent Calendar is back with us again. For every yin, so a yang.

The theme this year is 'small beer', that is, bottles no bigger than 330ml. I'm not quite sure why I've limited myself to this; possibly because I'm desperately trying to lose a beer belly in time for heading out into the wild, unwelcoming world of dating again.

But we'll leave that for now and concentrate on the beer in hand, which in this instance is a particularly handsome-looking Elizabethan Ale from Harvey's of Sussex. The bottle itself looks Elizabethan for some reason. Maybe its the purple sashes or galleon on the label. The hefty alcohol content certainly looks Elizabethan. As long as it doesn't taste of rancid ruffs and Shakespearean codpieces, it'll do for me. 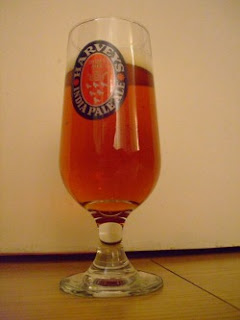 Beer: Harvey's Elizabethan Ale.
Country: UK.
Strength: A whopping 8.1%.
Colour: Brightly polished mash tun copper.
Smell: Prunes and unidentifiable solvent; a recipe for fun and games on any park bench. You wouldn't want to be the park keeper, though.
Circumstance: Just done three quarters of an hour on the turbo trainer after cycling home in practically sub-zero temperatures along the treacherous Old Kent Road. So a bit thirsty, then.
Tasting notes: Frightening stuff. Sharp as a tack, swarthy and full of feist. But for something this intimidating, it has a lightness and zest you'd normally expect with a golden ale or IPA. I hesitate to venture too much on the flavour as the exact fruits, malts and bitterness are shrouded in the murky depths this ale clearly borrows from the river by which it's brewed. It's as the flavour ebbs away that the beer really comes into its own, though. A healthy breakfast of unsugared grapefruit skiffs its way across your tongue like a startled pond-skater. Burping only serves to draw out that sensation.
Drinkability: Surprisingly good. I'm not put off by the strength or the rounded edges and the concluding bite it delivers begs another sip.
Gut reaction: I belched within five seconds of the second mouthful.
Session factor: Are you kidding me? They sell this in small bottles for a bloody good reason.
Arbitrary score: 7.6
Posted by Eddie Grace at 22:18

Len & I had one of these on our last Saturday Night In, purchased from the brewery shop in Lewes. Surprisingly palatable, given the strength, but the second one remains undrunk in my wine rack, which is quite unusual...

An excellent opener for this year's calendar. Really looking forward to reading on the run up to Christmas!

Welcome back beery advent calendar... good stuff mate. Good luck getting through the month. All the best, cheers.

Cheers, Roger. You heading to the CBTR Christmas bash?

Indeed I am. We'll have to have a pint (predicatably). See you there.