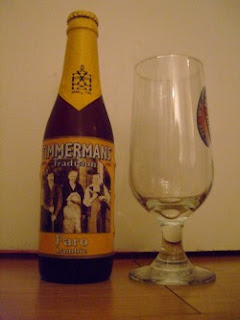 Some years ago, I spent some time in Toulouse writing about planes for a well-known aircraft manufacturer that isn't Boeing.

In the immediate area around my flat, just before I moved in, there had been a terrific Belgian bar that served all manner of beer. This had been forced to close down due to the building of an extension to the underground railway, much to the clear disgruntlement of the owners, who had grafittied their feelings all over the hoarded up building.

So all that remained were bars selling a wide range of beers, to wit, Pelforth, Heineken or Stella Artois. Then there was the faux Irish bar owned by two Frenchmen, which sold Guinness at great cost. But it also sold Faro, evidently a refugee from the place opposite.

Now Faro is a kind of sweetened Lambic beer (here's a Wiki link, I'm not about to explain it now) and it came in an ornate bottle with a cork instead of a bottletop and was poured into a nifty little glass. How I enjoyed the long evenings drinking with the lonely engineers gazing longingly at the barmaid and thinking of home. They piled through the 'English' lagers like there was no tomorrow, while I sat dreaming of anywhere but home and drinking 'sophisticated' beer. I still got as drunk as them though. And in such moments tried to catch the barmaid's eye too.

Thing was, Sam (as we'll call her. Because it was her name) had dual nationality. Her father was French and her mother was English. From my home town. So while the engineering fraternity would try their damnedest to vie for her attention, I'd just wander in, pull up a stool and have a beer waiting for me by the time I'd sat down. The guys must have hated me.

When I left Toulouse, I heard she'd become engaged to one of the engineers. I know there's a lesson in there somewhere; probably something about no one liking a smartarse. 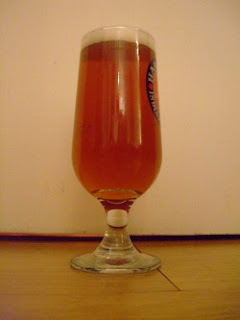 Beer: Timmermans Faro Lambic
Country: Belgium
Strength: A whispy 4%
Colour: A dull, light copper of turning leaves
Smell: Cider vinegar and bruised apples.
Circumstance: Day full of achievement and diplomacy at work, brutally cold cycle home over the Col de Crystal Palace. Ready for this.
Tasting notes: It tastes of the Melting Pot, the faux Irish bar that took much of my wage. The Faro I used to drink was more cloying, but this one gets the sweet and sour balance right. It is fairly gushing at first, though. Like an over-keen new girlfriend you're not entirely sure about. This is soon put right when her dad comes in, rips the needle from the record player, clips her round the forehead and chases you down the stairs with the sound of his daughter's plaintive but ultimately fruitless pleading ringing in your ears. Yes, it's a short, sharp shock. But you'll be back for more.
Drinkability: Excellent. A pleasure to drink, not too sickly and the finish leaves you hankering for more. See above.
Gut reaction: Looked initially like it'd cause some damage, but the fizz has subsided and it now feels OK. That said, the cider-leaning tendencies may cause discomfort further down the line.
Session factor: Not great, really. And here speaks the voice of experience. Having several of these is akin to being five years old and finding yourself left alone in the cake room. Yes, I know there's no such thing, but believe me, too many and you will be sick. I'm beginning to gip already and I'm only half way through it.
Arbitrary score: 6.8
Posted by Eddie Grace at 22:10