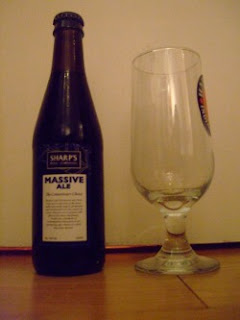 There comes a time when you've just got to step up to the plate despite whatever fate has thrown at you, take it on the chin and get on with it.

The Beer Advent Calendar is doing just such a thing right now. Having cast off the memory of a desperately disappointing previous instalment, it's onwards and upwards with a new ale.

And what a contrast this one is. As weedy as the last one was, so is the current bottle an absolute hulking giant of a monster. Brewed in Cornwall for people with big hands, this ale tips the scale at a quite mind-numbingly stupid 10%. That's about the strength of a white wine from the '70s.

But there's where the comparison ends. There's more body in this beer than in a Germany of nudist camps. I swear you could pour it into a bowl and eat it with a fork. It's not especially complex - that's not what this kind of ale is about - but what it lacks in subtlety it definitely makes up in brute force.

It's the kind of beer that wouldn't think twice about manhandling you out of its premises if you gave it a funny look. It'd probably add a swift kick of its size 10s too, just to make sure. But after the insipid nature of the previous one, I really don't mind that sort of treatment.

In fact, I've almost convinced I want to go back for more. Now that's what I call stepping up to the plate. 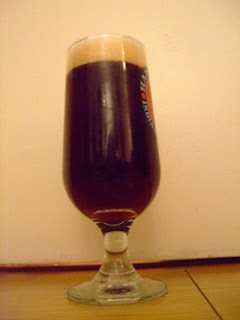 Beer: Sharp's Massive Ale
Country: UK
Strength: A quite ridiculous 10%
Colour: Brooding, ominous deep red
Smell: Overpowering, like a brewing, charring cauldron of molasses
Circumstance: Just getting on with it after the disappointment.
Tasting notes: Like the name suggests, this is a huge bowl of flavour from the off. Gasp as the molten lava of gloopy treacle envelops the tongue in its slow, deathly embrace. Marvel at the scalpel sharpness as it cuts a swathe through the thick tar the lava left in its wake. Fear the rush of dark spirit finish that threatens the very ecosystem that once grazed happily among your tastebuds. As a marauding pack of Vandals, this beer lays waste to anything and everything in its path.
Drinkability: Relatively high considering the punishment your mouth gets while you quaff it. It's certainly going down quicker than the Moosehead.
Gut reaction: Again, my clumsy hands of concrete have disturbed the sediment, so coupled with the lack of dinner this evening, this beer is liable to cause upset and less-than-solid bowel movements in the fullness of time.
Session factor: Utterly negligible. I'm halfway through and it's like I've poured neat ethanol directly into my brain.
Arbitrary score: 7.8
Posted by Eddie Grace at 22:57