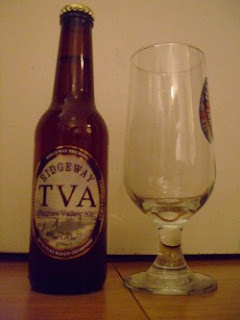 Things are never quite the way they seem, as the great Stan Ridgway, formerly of Wall of Voodoo, once sang.

Stan knew a thing or two about appearances sometimes being deceiving. The track referred to in the title, in truth, sounds a right old plodder. It's only when you listen to the words more carefully that it turns from a gung-ho military paean into a Big Joe and the Phantom 309 for the Vietnam generation. Trouble is, it takes some perseverance to give it the time of day.

So where does this beer fit in? Well apart from the brewery almost sharing the Ridgway name, it's also a deceptive little number that many would take a fair deal of convincing to drink. The brewery is named after an ancient road that follows a low escarpment across the south west of England, laid way before the Romans turned up.

And you feel this is the kind of beer the druids who built that road would have given their blessing to, maybe even drunk themselves given it's weakness. But what it lacks in strength it more than makes up for in complexity of flavour. You wonder how the brewer packs so much into something that really shouldn't taste so rich.

I like the label on the bottle too. A fairly plain, pastoral scene with a pale sky and no real drama. No tasting notes or recommendations for what temperature at which to drink it either. Almost like it trusts you'll be guided along the right path merely by having chosen it in the first place. 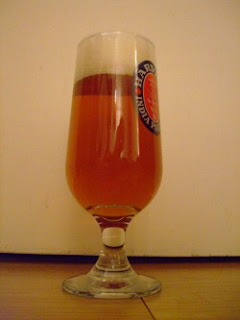 Beer: Ridgeway Thames Valley Ale
Country: UK
Strength: Merely 3.4%, though it punches well above that
Colour: Lyle's Golden Syrup
Smell: Yeast almighty. It's some seconds before it begins to smell like a beer and not a proving loaf of bread.
Circumstance: It's been a long, toiling Monday without much in the way of reward. The enormity of my workload and various other aspects of my life is beginning to become clearer. But there were uplifting moments, not least reading my daughters to sleep with The Elephant and the Bad Baby.
Tasting notes: Can you describe a beer as tasting like it's fleet of foot? Well I'm going to anyway. It ghosts its way on to your tongue with a scattering of pollen, like a fat bumblebee buzzing its laden way back to the hive. Then as a frightened mouse skitters away to hide, so the hint of fullness disappears across the horizon as if fleeing approaching Mongol hordes. It's replaced with a tiny dash of peppery freshness that crystallises momentarily, then sinks without any hint of ever having been there before.
Drinkability: Tremendous. I honestly think I could drink this all day long.
Gut reaction: Too weak to be disturbing.
Session factor: Dizzying. A real session ale, this, with its low alcohol content and high interest flavour.
Arbitrary score: 8.2
Posted by Eddie Grace at 22:00

Loving the advent calendar again. Why this does not have a wider audience is beyond me.
Love
Mel (Mel's Blue Rug)

I've been enjoying the advent calendar over the past few days and I was especially interested in this one.

I have a bottle of this in the beer store and have been putting off 'baron rating' for fear that it's watery nothing - your description has proved otherwise!

Thanks, Baron. Have you opened it and had some? I honestly wish I'd had a few bottles so I could get a couple of pints of it. Great session beer.