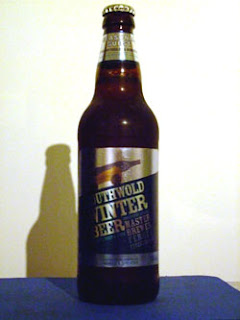 And at a premium too. But then they did have a four-for-three offer on, which brought this particular beer down to a more sensible and even fairly reasonable £1.62.

What wasn't reasonable was the utter soaking I received when I popped out from work to pick up these beers. What had been a greyish yet perfectly acceptable afternoon turned nasty in the time it took me to select these particular bottles, so I received a proper drenching from the the monsoon that was just nipping over to London for a spot of Christmas shopping. Or should that be sopping?

I've been in a foul mood ever since, compounded by being moaned at while working slightly later than planned. Whether this puts me in the right or wrong frame of mind for reviewing today's beer, I'm not sure.

But as there's only one way to find out, I have no option but to crack open another bottle... 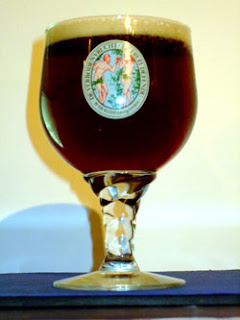 Beer: M&S Southwold Winter Beer (brewed by Adnams)
Country: Suffolk, England
Strength: A piddling 4%.
Colour: Roasted chestnut
Smell: Wet, sherried Christmas pudding
Circumstance: Waiting for dinner, still with a fairly sizeable grump on after getting a repeat soaking on the way home.
Tasting notes: Thick and treacle-y at first with a robustness that belies its meagre strength. In fact, it stands up to scrutiny pretty well, although you could probably have it in a fight. There's a flattening and drying out later on that feels like someone's sponged the inside of your mouth down, which isn't entirely unpleasant but it's unexpected and does take you a little off guard. But given how much moisture I've had to cope with today, that sensation is rather welcome, so hats off to master brewer Fergus Fitzgerald for that. Somewhat unnervingly, around five minutes after the first drink, I'm getting a taste of stale railway station tea, which is somewhat less welcome. Could do better, Fergus.
Drinkability: There are no real issues here with sticking a few of these away. In fact, the almost acrid finish practically forces you to swig more.
Gut reaction: I'm guessing the darkness will tell on the way out, but over an evening it shouldn't cause too many complaints.
Session factor: I'd happily have a few, but I might fancy switching afterwards, especially given the stale tea factor. Solid without being inspiring, it's the beer equivalent of David Moyes. Or Rob McElwee off the weather report.
VFM: 6.5. While not expensive, it's not bargain either given the compunction to purchase several to make it vaguely cost its worth.
Posted by Eddie Grace at 21:12