Gone for a Burton 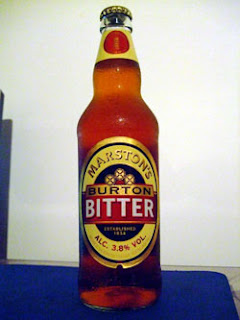 It's been a long old slog and hard going in parts.

But I'm now safely back after a four-mile hike back from work in post-blizzard conditions and really looking forward to tucking in to the latest from the calendar. Transport for London must have been working overtime tonight, answering calls from irate travellers, as most of the capital came to a standstill.

London Bridge station closed, buses crawling at a sloth's pace, cars tippy-toeing with breathtaking caution. It was life transported back several decades and none the worse for it, I found.

So I donned the walking boots I'd left at work for no apparent reason and set out for home on Shanks's Pony. Many others had given up trying to return home by conventional means and had either repaired to the boozer or were trudging along looking out for taxis or unladen buses, mostly without success.

A fair few were revelling in it, including me I have to admit. For a brief moment, I was five again, plodding in wellies down the pavement and feeling the satisfying crump of compacting snow. An enterprising pair had even managed to fashion a snowman of sorts out of the already melting sludge.

So although tricky, my journey home was really rather enjoyable. This despite having the world's most blocked sinuses. I think I'd find it easier to breathe were my nasal passages filled with concrete.

Still, there's always Lemsip, although I've shunned that so far this evening lest the zest interfere with the beer. Perhaps a couple of ales will shift the blockage? 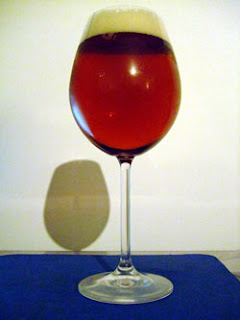 Beer: Marston's Burton Bitter
Country: Staffordshire, England
Strength: A lightweight 3.8%
Colour: It looks like the cork end of a cheap cigarette.
Smell: What's seeping through to the scent receptors is sharp, spicy and citrusy with a hint of malt; no bad thing in my current condition.
Circumstance: Just walked home in the snow, which was more pleasant than I expected when I set off. Now in the warm flat and listening to the Purple Radio Christmas Crackers mix and beginning to feel festive.
Tasting notes: Exceptionally clean. So clean, in fact, that it appears to taste of very little. But it's all about subtlety, you see. There's a faint suggestion of malty biscuits and tiny bit of mandarin orange pieces that you used to get in a tin. Then there's a tiny lap of bitterness before a trickle of subsiding sherbert drains away on the tongue. I don't think I'm overplaying it by suggesting this is one of the better session beers I've had the pleasure to neck. And I am necking it.
Drinkability: Well, I've practically finished it in the time it's taken me to type this out, so that should tell you all you need to know.
Gut reaction: Doubt it'll be in there long enough to cause much trouble.
Session factor: Ridiculously high. Low alcohol content and great taste combination equals huge session capability.
VFM: 9.7. Only a pound from Lidl, so you can't grumble on that score at all. You could get roaring drunk for a tenner, which in this day and age is a rarity indeed.
Posted by Eddie Grace at 21:56