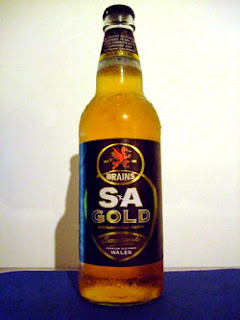 In these days of the information superhighway and social networking what-nots, a blogger has to be careful what he writes.

But it was with an immense sense of pride that I found out a brewer to whom I'd made mention in an earlier post had been sent the comments and, flatteringly, had bothered to read them. That he then pretty much agreed with what I'd written is a real boon, so I've been looking forward to reviewing tonight's ale just so I could brag about it. *shines chufty badge*

Well, obviously not solely to bang on about it; there's a beer to be drunk after all. And from first glance, it doesn't look bad either, although it does have an element of Benson & Hedges about it. Brains tends to be marketed towards the rugby crowd and I'm guessing this one's aimed at the lager-drinking segment of that fraternity. There's been a lot of this from brewers in recent years, doubtless trying to claw back some drinkers from the dark side using the sophisticated method pioneered in the natural world by the humble chameleon. Proper cunning, that.

I've been reluctant to endorse this gold-rush thus far, principally as a result of being a stubborn git but also down to the fact many of these lager honeypots taste almost uniformly dull and dusty. I've high hopes for this one, though. Quite a fan of Brains usually, so I'm hoping they don't fail.

This one's for you, Fergus. Ta for reading and I hope you didn't take offence over the stale tea comment - you've a mostly sterling beer, there. Keep up the good work. 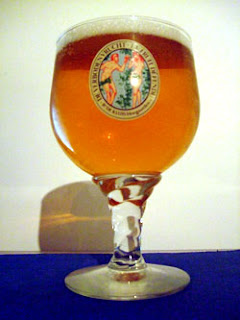 Beer: Brains SA Gold
Country: Wales
Strength: A punchy 4.7%
Colour: Gold, obviously. Could quite easily pass for lager.
Smell: Rounded and flowery with a hint of cream soda and a dash of mandarin orange
Circumstance: End of a long, hard week at work. Must have been stressful because I eschewed the traditional post-work snifter.
Tasting notes: You know what? That's pretty much all you'd want out of a golden ale. The bitterness wades straight in there like an over-eager teenager trying to get served at the bar and ordering a pint of 'beer'. There's little of the promised floweriness initially, but what you do get is a sherberty surge almost as powerful as fizz bombs before this all calms down and delivers an almost biscuity drying out. I can see how this could turn the lager drinker - the complexity doesn't really kick in until your tastebuds have been convinced they're sampling something relatively bland, if fizzy. I'm coming round to seeing this as some sort of 'Orange Stimulator', provoking the lager trout into an aggressive response before reeling him in to the riverbank of real flavour.
Drinkability: Sensational. Truly a prince among golden ales. The a.b.v. tag might prevent me hammering it, but I'd gladly work my way through half a dozen of these in one, albeit prolonged, sitting. Refreshes the parts most lagers have been trying and failing to reach for decades.
Gut reaction: Fine now, but there is some gas to be wary of, so treat with caution and have some food, for heaven's sake.
Session factor: Worryingly high. See drinkability.
VFM: 9.7. Quid-fifty a bottle on offer at Sainsbury's is good in anyone's language, especially given how marvellous it tastes. Highly accomplished.
Posted by Eddie Grace at 20:16

glad to see a Welsh lager reprezentin' and scoring well. :)

see also: Brains 45 for an interesting lager/ale cross. big favourite as a "night starter" in our house...