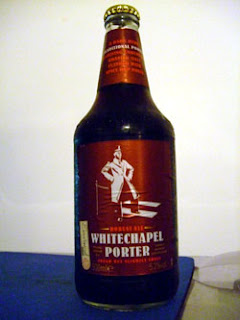 It's with a heavy heart, but an even heavier beer, that I bid farewell to the Beer Advent Calendar for another year.

Now I'm fully aware this should have been all wrapped up before Christmas, but what with having decorations still to put up and trees to dress and all that, I only really got time for one (and a light one at that) before sloping off to bed on Christmas Eve.

Think yourself lucky; it was a good 11 months before I got round to the last one of 2008's calendar. In the two years prior to that I was clearly built of sterner stuff. Actually I've just checked and it looks like I didn't finish the first one I did at all. Lightweight.

Which brings me around to a subject I'm keen to discuss. Should I just carry on throughout the year? I mean, there's no way I'll keep it up every day, not least because I've got a few mountains to climb on a bike in July, but the idea did occur to me the other day while knocking back a pint in the Market Porter. Carry on rattling off some words about beer for the rest of the year until the next calendar comes around. But it'll be a sporadic effort by design as well as necessity. And habit, of course, as I'm not the most fastidious when it comes to prompt, painstaking daily updates as I'm sure you've noticed.

Anyway, all that remains this year is to finish up the last one and thank you all for tuning in over the course of the last month. I've had some nice comments and been pointed down a couple more avenues to explore that may or may not materialise, but it's been all good. Most of all, I've had some really tasty beers and rarely paid handsomely for them. A quick tally puts the final figure at around £30, which you can't argue with for 24 ales of mostly high quality. 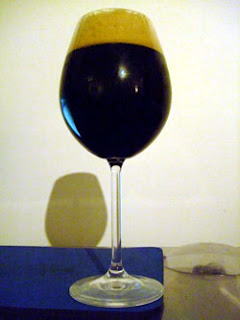 Beer: Asda Whitechapel Porter
Country: England
Strength: A not particularly brawny 5.2%
Colour: Mahogany, a singularly faithful-sounding colour if ever there was one. But with a hint of scarlet, the brazen hussy
Smell: Maltier than a box of Malted Milk eating a Malteser on maltloaf sandwich. With Marmite on.
Circumstance: Boxing Day evening and not remotely the worse for wear after a strangely sober Christmas. With the missus being practically teetotal nowadays, that's hardly surprising.
Tasting notes: I'm getting Christmas cake, I'm getting sweet plum pudding, I'm getting delicious dark fruit flavours. And I'm coming over all Jilly Goolden. Thankfully, the kids have gone to bed. This really is a winner from the word go. Its label claims it's got underlying roasted malt flavour with spicy hop notes, but I think that's mostly claptrap. If anything, the malts are sweeter and fuller than more roasted ones, while there isn't a great deal spiciness at all (OK, maybe a bit at the end). The finish is characterised by a good kick in the face from a pair of treacle toffee hobnail boots, of the type the top-hatted gentleman thug on the label appears to be wearing. It's only right at the death that you get a hint of sharpness; doubtless the stiletto said bespectacled doorman is twisting into your cranial lobe as he plunges the flavour into your chest for good measure. Fantastic.
Drinkability: For a beer as dark as this, it's surprising how easy it is to down. I have a sore throat at the moment and this feels like a bottle of alcoholic Strepsils, soothing its path downwards as I swallow.
Gut reaction: Been belching already and I've not really over-eaten this Christmas, so there's something in the beer that's potentially volatile.
Session factor: Right now, I could gladly polish of a fair few. This is definitely a winter by the fireside drink, though. Not sure I'd be all that happy drinking it in any other month.
VFM: 9.9. Overall value winner here. Only a quid for a fantastically tasty, complex, smooth, satisfying, moreish, great-big-jumper of a beer. I'll be laying in some more tomorrow.

Wow. Thanks Camila. Those girls look like they love a pint.