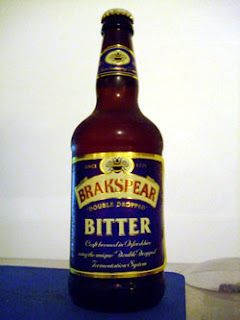 Well, it was a close-run thing. Dropped a bottle on the steps outside but weirdly it didn't break.

It's double-dropped as well, so that potentially makes it the first triple-dropped beer I've ever had. Would have been a sickener if it had smashed, capping off a day in which our last-minute food shopping was nearly derailed thanks to a fire at New Cross Sainsbury's. Thankfully, both our victual-gathering and the beer survived intact.

This is, of course, the penultimate beer in the calendar, which means I'm still one day behind schedule. But given today's exertions, I'm only planning on shifting the one this evening, so you'll have to wait till Christmas Day for the final update. Something to look forward to after the Queen's Speech and Eastenders, eh?

Looking at the label tells me this is a fairly low maintenance ale that shouldn't trouble me too much, which is exactly what I need. I ended up pouring just under half of last night's down the sink as it was just too strong and, well, not very nice. I don't think I've done that on the calendar before, but the combination of works night out and poor-tasting beer wasn't one I wanted to perpetuate.

Still, I better get on with it as I need to start preparing tomorrow's food. We've decided to dispense with tradition and have curry, so I'm getting as much out of the way tonight as possible to make tomorrow a bit less stressful. 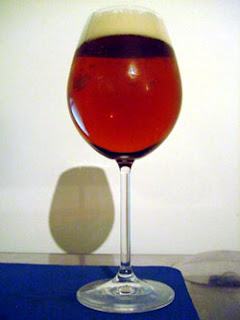 Beer: Brakspear Bitter
Country: Oxfordshire, England
Strength: A reassuringly weak 3.4%
Colour: Russet
Smell: Bit vinegary to be honest, but there's a saving grace of yeast riding to the rescue
Circumstance: Still trying to get everything done in time for Christmas having successfully fought off a hangover all day. And listening to Purple Radio, of course.
Tasting notes: To say it's on the lighter end of the scale, it's surprisingly tasty. Fairly one-dimensional, though - all about the refreshment and bitterness - but it dries out towards the finish and is moreish as a result. I can just make out a dash of orange in there too, but this isn't the complex, fragrant beer its label claims. No bad thing, though. You can have too many things going on in a beer and this doesn't suffer from that.
Drinkability: Excellent. Pleasing to the tongue and has that lovely hook at the end that draws you back in.
Gut reaction: Too weak to cause any problems, I'd have thought, although it's slightly gassy and belch-worthy as a consequence.
Session factor: Ridiculously high. At only 3.4%, you could easily polish of a fair few without realising. Lightly chilled, this would make a terrific summer afternoon tipple.
VFM: 9.5. Another pound-a-bottle bargain and potentially session beer of the calendar.
Posted by Eddie Grace at 21:51