All the gold I could eat 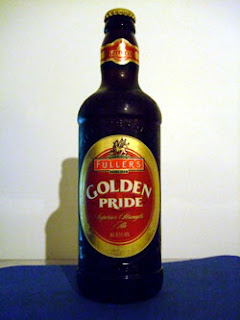 Time to roll out the heavyweights, especially given the weekend's fast approaching.

In response to a certain retailer's mean-spirited price hikes (see yesterday's entry for slightly more details), I decided to make my selections based purely on alcohol content by volume. Up yours, Sainsbury's. I'm one step ahead of you, you miserable Scrooges.

This may or may not have been a wise move. While there's every chance just one bottle will make me feel light-headed, there's no guarantee beers this strong won't end up tasting like the entrails of a long-dead skunk. I steer clear of some of the less well-known names and choose carefully as a result.

Sadly, I don't think British beers can do stupidly potent beers of the kind of quality the Belgians seem to be able to churn out with the ease. Almost all I've tried have tasted like Gold Label Barley Wine, a cheap and remarkably efficient way of seeking inebriation as a teenager if ever there was one.

But given I'm on a credit crunch calendar this year, I've little choice but to extract value from wherever I can. This evening, I've gone for the strongest I bought, but the other two are no featherweights either. A combined a.b.v. of 21.4% for the princely sum of £4.66 is a good return in anyone's language.

Up to now, I've worked out, my beer advent calendar has set me back £13.90, plus whatever I paid for the Greengrass which I frankly can't remember. For 10 beers, that's not bad at all.

Must make an extra-special effort to bring the average down below £1.50 a bottle, though, which I expect will mean a visit to Lidl. 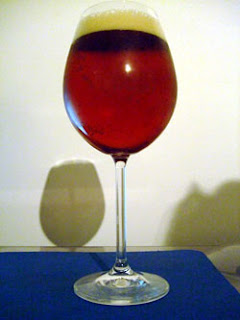 Beer: Fuller's Golden Pride
Country: London, England
Strength: A malevolent 8.5%
Colour: Menacingly deep amber with a chestnut jus
Smell: Rich fruitcake stuffed to the gunwales with fortified wine. With a rake-load of freshly mown lawn clippings and a small hit of amyl nitrate. Frightening.
Circumstance: Seeing light at the end of the long tunnel of a work-weary week.
Tasting notes: Ouch. That hurts. It packs a punch bigger than that Ukrainian giant Nikolai Valuev and is about as welcome on the tastebuds. There's a brief moment of sharpness when you're convinced it's going to go quite nicely, but suddenly it veers awkwardly and plunges you down into the abyss of a cloying, malt-heavy liqour ravine. There's little respite as a wave of cheap, strong vodka crashes through before gently, but slowly, ebbing away. The weird thing is, it's actually going down comparitively well.
Drinkability: Difficult. Worth persevering with, though, as I am beginning to enjoy it just under half way through.
Gut reaction: Nothing to fear too much here, except for the immense strenth. Moderation should see you through safely, though. Which leads me on to my next point.
Session factor: Negligible. I doubt you could stand more than two in a single sitting. It's really not a session beer, being infinitely better suited to insouciant sipping than reckless glugging.
VFM: 8. Good value due to its potency and usual price tag, which is somewhere above the £2.20 mark.
Posted by Eddie Grace at 20:44