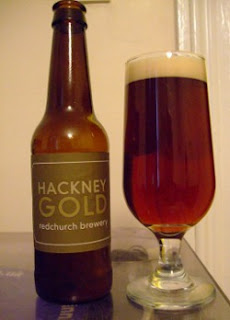 The trouble with randomness is that it has a tendency to throw up some distinctly uniform patterns. So it is that just three days into the calendar and I'm drinking another beer with Hackney and a colour in its name.

Redchurch Brewery, based in Bethnal Green, has only been going a few months but it's already garnered some critical acclaim among beer bloggers and ordinary ale-drinking folk. Personally, I've never touched the stuff. Hell, I'd never even seen the stuff before my bottle gathering took me to the City Beverage Company on Old Street, where I was told by the brewer himself they stocked Redchurch's fare.

City Beverage Company is a terrific place. It sells all sorts of drinks, from Chinese tea and Ethiopian coffee to quality craft beer and fine wine. It's not a huge shop, so things are piled high. It's almost like you're in a second-hand bookshop, but with drinks instead of books. Well worth a visit.

But back to the beer. Redchurch do three beers, all of which have made it into the calendar this year. I'm told the stout is great, but that the Hackney Gold divides opinion. I'm really hoping it's not just another standard golden ale of the ilk I've slagged off before and I do wonder when the backlash against pale-coloured ales will start in earnest. Beer-coloured beer does seem to be a rarity these days.

I like the packaging on this stuff, though. Nice and simple, nothing too ostentatious, fairly understated. But something tells me the beer may not share those characteristics.

Beer: Redchurch Brewery Hackney Gold
Strength: 5.5%
Colour: Not gold. Fantastic. Russet, I'd say. And a bit cloudy, courtesy of my ham-fisted pouring
Smell: Yeasty as a proving loaf, with a good dollop of apple crumble thrown in for good measure.
Tasting notes: Beautiful, rounded, full and smooth orangey opening that surrenders to a tangy foe of a finish like a lily-livered Walter Softy waving a white flag at a hairy spider. This is a proper, autumnal fireside of a beer rather than the summer lightener I was expecting from the name. I'm really not sure why it's called Hackney Gold since it's neither made in Hackney nor gold. Clearly names count for nothing these days and a good thing that is too. It's a repeater as well. It's taken me, what, five minutes to write these tasting notes and I've practically finished it.
Gut reaction: Not much in the way of carbonation in this, so I don't expect too much wind, sediment ingestion notwithstanding.
Session factor: Modest alcohol count plus borderline addictive taste equals proper session ale.
Arbitrary score: 17-20
Posted by Eddie Grace at 14:26

sounds delicious, although i'm not sure The Thames is a good starting point for any ale ;)