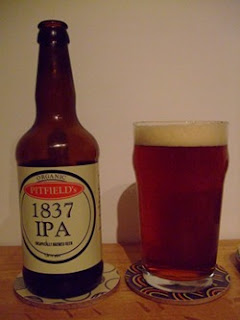 Been fairly lax due to one thing and another, so for the second time this week I'm again presented with a double bill of beers. Hardly particularly professional, is it? Still, it's for the love of it, so a bit of slippage here and there isn't going to hurt anyone I don't expect.

It's around now, just about a third of the way in, that I traditionally start to question why I bother with this. It's a bit of an effort and I've never managed to go through the whole thing without missing a day.

But perhaps that's a good thing. Gives the liver time to recover a bit. The creative juices the chance to replenish, although there hasn't been a great deal of evidence of that happening so far this year.

Not to worry. A couple of bottles of inspiration and it'll all come flooding back, right? Although quite honestly, neither of the two out of the calendar in the last couple of days are having me licking my chops in anticipation. 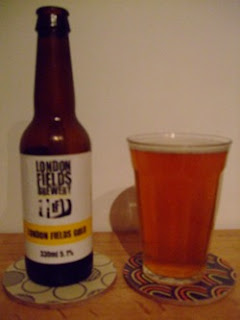 Yesterday's was a Pitfield's 1837 IPA. Now I've heard mixed reviews of this stuff, ranging from 'awful' to 'downright undrinkable', so I literally can wait to try it. I've also just found out it's now brewed in Cambridge rather than London, which is something of an additional disappointment, so it's looking fairly bleak.

Today's is a more promising prospect - London Fields Gold. Yes, yes, that's another golden ale I'm drinking. But I've not had anything from this new addition to the London brewing scene, so there's at least a small element of surprise in store.

Beer: Pitfield's 1837 IPA
Strength: 7.6%
Colour: Dull, lifeless amber.
Smell: Nothing at all like the IPAs I've been drinking recently, it smells more like a strong premium bitter: sweet, fruity and fusty rather than spicy and enticing.
Tasting notes: It's difficult to say which camp I'm in here, but just two hearty glugs in and I'm erring towards the undrinkable end of the spectrum. It's a bit like drinking a badly out of date pint of London Pride that's somehow chanced upon a supply of steroids and beefed itself up a bit. While simultaneously having passed out and allowed something already fairly smelly to crawl up its arse and die. The sleevenotes have it that this is a beer brewed to an historical recipe. I can only think there's every reason the recipe should have stayed that way.
Gut reaction: A beer more likely to turn my insides into a fizzy bum gravy producing factory I don't think I've had for many a year.
Session factor: Dismally low. I've already given some of this one away and am seriously considering pouring the rest.
Arbitrary score: -274

Beer: London Fields Brewery Gold
Strength: 5.1%
Colour: Opaque, light gold. Like someone didn't pour it carefully and the sedement's ended up in the glass.
Smell:Really disappointing. Like a wet pair of jeans left in a plastic bag for a week crossed with a cat's breath.
Tasting notes: Much, much more disappointing than the smell. I think it must be off. Is it entirely fair to review a beer you think is off? Well, given I've nothing else, I guess I will. This has next to no merit at all. There's precious little about it from the start, a damp squib of a finish and an utterly unconvincing middle that you wonder why they bothered. Now I had a glass of their beer when I collected this bottle and it was lovely, so I know they can do it. But this shouldn't have been allowed out of the building and the poor aroma and below average taste cannot be put down to clumsy pouring. Pleh.
Gut reaction: I fear for my innards.
Session factor: A decent one would score fairly highly, I reckon. But I wouldn't want another one of these again on the strength of this bottle.
Arbitrary score: 0-2
Posted by Eddie Grace at 20:23