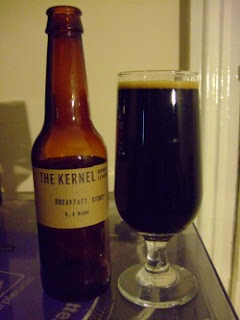 There's probably some perfectly reasonable explanation behind it, but you have to admire the sheer audacity and recklessness of calling a beer Breakfast Stout.

I woke up in morning and got myself a beer, crooned Jim Morrison, in a fairly ostentatious display of bravado and insouciance designed to appeal to rebels and poster buyers the world over. Bet he didn't help himself to one of these, though. Would have flattened the bugger, I reckon.

And weighing in at a terrifying 9.3%, I'm not surprised. If you can down something like this for breakfast, you have to have the constitution of an Indian elephant that's spent its entire life cleaning out vindaloo pans. Imagine sitting down to a couple of slices of toast and a bottle of this before heading out to work. Unthinkable.

Has to be another reason. Maybe it's stout for people who haven't had one for a while and this one breaks their stout fast. Perhaps it's thus named to remind you it needs drinking first, before any other inferior stouts get in the way. It could even be that it's so full-bodied it constitutes an actual meal and the most important one of the day at that.

Whatever the truth behind it, there's no denying it's a drink that would raise a few eyebrows when ordered at a bar.

Beer: Kernel Brewery Breakfast Stout
Strength: A liver-bothering 9.3%
Colour: The Grand Union Canal, at night.
Smell: A cold espresso crossed with cooking sherry and raw field mushrooms.
Tasting notes: I've had to go away and come back five minutes later, such was the impact of the first sip. A beautiful, plummy sweetness hits you first of all, but that doesn't last. No, that's quickly replaced by what feels like a cascade of tingly droplets of frozen bitter lemon that gets progressively sharper the more it coats your tongue. And this is viscous stuff, so there's really no hiding place. Amid the ice storm, there's a stab of Calvados that pierces like a falling icicle, pinning your palate to the floor of your mouth. It then twitches its last judders of life before flickering out. Gone.
Session factor: Oh, behave.
Arbitrary score: One million pounds
Posted by Eddie Grace at 20:32

Hell of a breakfast beer!! had this at 10 at night and still thought it was too early.

I've got one I've been too scared to crack open but if you can brave it, then so can I!