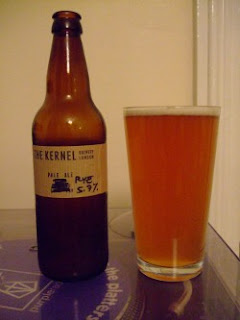 Well what a dismal weekend for beer it's been. Holed up at my parents' place with nothing but a couple of off-tasting cruddy ales for beery company.

But it's funny how things can change in the blinking of an eye. Well, they can in the land of the Beer Advent Calendar. Moments after returning, I venture to the calendar and pull out today's offering. And stone me if it isn't a Kernel Pale Ale Rye. As crafted by my fair hand.

OK, that's potentially pushing it a bit. I helped in it's preparation. All right, I was there on the day it was brewed. And I didn't manage to spill or ruin anything.

That was the second time this year I've been along to the Bermondsey arches to drink in the convivial atmosphere and see if I can learn anything about brewing beer. Think I've remembered most of what I picked up in the two visits and it's inspired me to have a crack at maybe making some of my own next year.

So in a way, no matter what this stuff tastes like - and I haven't tried it yet although it's been ready at least a week - some good has emerged. Even if it tastes rank - and I'm fairly sure it won't - then some creativity will be born from the experience.

Beer: Kernel Brewery Pale Ale Rye
Strength: 5.7%
Colour: The pale orange of expensive 1970s skateboard wheels
Smell: Oddly reminiscent of the early 80s fizzy drink Quatro.
Tasting notes: Oh, the relief. Of the 'thank fuck for that' ilk. When you check your coat pocket the next day and find your wallet is still there. Or when you finally locate that email that covers your arse and makes the client's complaint fade away into nothing. As if it never existed. There is just about enough so-called tropical (read: sweet) fruit flavour up front, but that doesn't stand a chance as our hoppy light brigade makes its headlong charge into the Russian guns of your tongue, sabres rattling and defiant and with no care for their own safety. Sure, their blood will eventually stain the buddy battlefield, but it will not have been in vain, by all the Gods. And that stain will take years to wash away, much like the bitterness this pale imparts for some considerable time after you've long since expected it to be gone. I think I may have discovered the ideal beer for slaking the thirst of a parched herd of migrating zebra.
Gut reaction: Hard to tell, really. There is a fair bit of sediment that escaped the bottle due to yet more clumsy pouring.
Session factor: Wish we'd make this in April as it would be ideal for summer afternoon-long tastings
Arbitrary score: 1969
Posted by Eddie Grace at 20:18