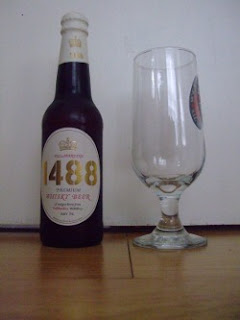 One of the more odd developments over recent years has been the advent of beers mixed with spirits. That is, lager with a shot of something or other in it.

Desperados, for example. Poor Mexican lager with a shot of tequila in it. What on earth are they thinking? I can't work out whether they think it's a good mix or if they're trying to disguise the awful taste of one or both ingredients. It sells, though, I'll give them that.

I'm more puzzled at the people who buy it, though. Just why? Surely it'd be better to buy them separately and mix them in your stomach like everybody else.

So pulling this next one out the calendar was something of a shock. It was given to me by my good friend Matt, who puts together the very excellent Whisky For Everyone blog. But I'm already suspicious. Whisky beer. Hmmm. How bad must the beer and the whisky be to make them want to blend it? I suppose they're not the worst bedfellows in the world, but something doesn't sound quite right.

Heartening, then, that it's not a mixture of beer and whisky at all. Rather it's an actual beer made by the Tallibardine Distillery, which is built on the site of Scotland's first ever brewery. The beer takes its name from the coronation year of King James IV, one of the brewer's patrons, and is aged in the oak barrels used to mature Tallibardine single malt Scotch.

I had a fair few Whisky Macs last night at the works Christmas party, one of the reasons there was no update yesterday, so there's still the faint taste of Scotch in my mouth despite some heavy duty teeth cleaning. I'm not quite sure whether that'll help or hinder, but given it's Christmas Eve and I've nothing to do, I don't really care all that much. 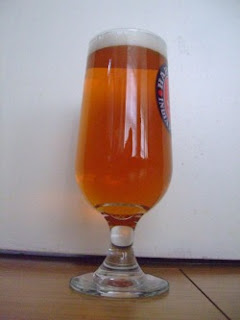 Beer: Tallibardine 1488
Country: UK
Strength: A Scottish Presbyterian 7%
Colour: Light, clear and golden. Like a whisky, really
Smell: Three parts whisky, five parts Shandy Bass
Circumstance: Post-works Christmas party afternoon already tainted by bad-tempered conversation
Tasting notes: Surprisingly good. Mellow at first, it sharpens up after a short while spent leaning on your tongue, cutting through the debris of last night's excesses with its Winkle-pickers as it buffs its nails on the lapels of its jacket. You can almost imagine it taking a comb out of its back pocket and running it through a lacquer-sodden quiff, licking its finger to straighten out its eyebrows and adjusting its lace-thin tie. Beer as juvenile delinquent, if you will. Doesn't taste of whisky at all, but there is a faint smokiness about the finish that completes the '50s lout image quite nicely.
Drinkability: Pretty high, actually. I'm amazed at how easily its going down under the circumstances. Eminently quaffable.
Gut reaction: I wouldn't want to put too many to the test, but this one is reasonably innocuous.
Session factor: You could easily rattle through a few of these despite the relatively high alcohol content.
Arbitrary score: 7.9
Posted by Eddie Grace at 14:28