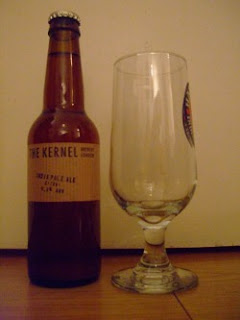 On a day when Russia secured the *kerching* franchise to host the world cup, I tussled with public transport from Southwark to New Cross Gate in an equally frustrating exercise.

Equally dulling was the bludgeon of a crushing workload. What assuaged this sense of crushing disappointment was the fact that I was required to reacquaint myself with reasons to be cheerful, one... two... three.

Walking to the bus stop home sees me pass three high quality juicers: The Charles Dickens, The Lord Clyde and The Royal Oak, all in London's SE1 postcode. Each had warming ales to ease the now-elongated journey home.

But having indulged in their most warming warmers, I'm presented with 2 December on the calendar. Hope springs eternal that it's not a bruising leviathan. 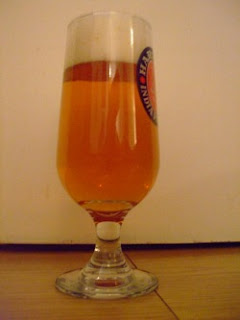 Beer: The Kernel IPA
Country: UK
Strength: A not entirely welcome 6.2%
Colour: Clarity begins at home: inside of a sleeping bag orange. With the sediment, it's 70s pine furniture.
Smell: Hideously strong skunk weed. If I weren't aware how that smelled, I'd hazard a guess at it being three-week old broken collar bone bandage.
Circumstance: The back end of a cheery walk and bus journey back to south east London. Here's hoping it cuts through the current carpet of clag lying across the taste buds.
Tasting notes: Oh well where do you start? An overriding clatter of grapefruit juice and a twist of lemon straight away, but the skunk flavour is never too far away. This never really disappears, but the character of it develops as the initial sting fades. It's as if your tongue is caught in a citrus mantrap that cripples your senses. But as time wears on and the shock subsides, you're left with an aching pain of the kind you really want to perpetuate. This beer is a wobbly tooth swathed in gum disease that smarts like Hell, but you're condemned to masochistically niggle at that hurt like Sisyphus needs to push the rock to the peak.
Drinkability: Terrific. Sharp, to the point, insistent and with the kind of moreish charm you'd find in Krackawheat or fruit sours.
Gut reaction: If you manage to pour without the sediment, there won't be any surprises. Less careful dispensers will feel the wrath of a thousand baked-bean suppers.
Session factor: While resoundingly strong, the sharpness means you could happily lay into a few before rationality kicked in.
Arbitrary score: 8.1
Posted by Eddie Grace at 22:06

Those Citra hops sure are potent! I love the 'citrus mantrap' description.

Did you pick up many other Kernels? I'm a big fan. I got their Imperial Stout last weekend and it's a big one.

I did pick up more Kernels, all of which have been brilliant. Big fan of Evin's work.

Pine Table furniture is very perfect on that kind of Beer displayed on this site.