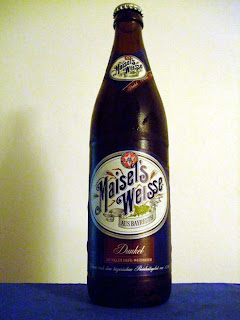 If only I hadn't laid it down on its side. I really hope this doesn't come back to haunt me.

OK, normally speaking, I'd not bother with another write-up if I'm catching up, but there is a danger I might get accused of ripping people off, so I thought I'd best make amends. That and the fact I couldn't resist the opportunity for a pun.

Trouble is, I daftly stuck this one in the fridge on its side and all the sediment has settled along the side of the bottle. Sediment is OK, but it can be injurious to the innards, so here's hoping I get away with this Scot-free.

I'm actually looking forward to this one, being a fan of the standard wheat beer from this brewery. I do like a nice black lager as well, principally as a result of having had a day-long joke around 15 years ago about a beer called Black Regent, which we renamed Black Regret after a party spent swilling the stuff.

Something about the darker colour makes it more intriguing and the more burnt flavour is much more suited to my palette. I like a bit of burnt, although nothing too charred. Let's see how this one turns out. 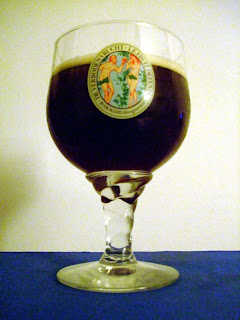 Beer: Maisel's Weisse Dunkel
Country: Germany
Strength: 5.2%
Colour: Dark redwood brown.
Smell: Caramel and damp oak with a whiff of treacle
Circumstance: About to go to bed, listening to Purple Radio, signing Christmas cards.
Tasting notes: Fairly fizzy to kick off with, it comes at you like a flimsy stout but thinks better of it and settles for just being a black lager. And there's no shame in that, for this particular dark lager has poise, style, brio and panache , all in one neatly assembled package. There's a feint tang of liquorice towards the end that is extremely satisfying and prods the moreish urge until you're reaching for the glass again.
Drinkability: Deceptively good. While dark beers can sometimes overwhelm, this one is just the right side of the line to keep you interested yet allow you to accommodate a fair few.
Gut reaction: There's a price to pay for that glugging, though. Wheat beers are known for their effervescense and this one's no exception. Also, the threatening-looking sediment could well spell trouble later.
Session factor: Average. You could knock a few back on a winter's night in a German oak-panelled tavern with straw on the floor and glowing candlelight, but being faced with it down the local Dog and Duck might see you stick to just one or two.
Posted by Eddie Grace at 23:20