Storm in a teacup 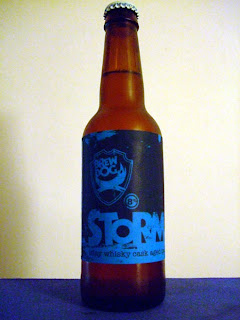 Forgive the clichéd headline (ain't that what they're for anyway?), but I've been throwing the toys out of the pram of late so need to drag myself back down to earth somewhat.

And what better way of doing that than to fill your face with honest-to-goodness Scottish peat? My only nod to the British Isles this time around is this bottle of weirdness recommended to me by the good people of Utobeer, from whom I've sourced the contents of my calendar this year. I was going to concentrate exclusively on foreign ales, but the nice chap behind the counter persuaded me otherwise. Besides, I'm sure the sweaties would maintain Scotland is a foreign country anyway (no offence to any Scotch readers out there ;-)).

Good old Beer Advent Calendar - moving from the borders to borderline racism in one easy paragraph.

So this week has been a bit challenging owing to us having had a bit of bad news combined with me having to work extra due to the pitch I went on today. Add the cumulative effect of no uninterrupted nights' sleep since 30 January 2007 and you're staring down the barrel of perma-tetchiness and intermittent brain-fade. On Saturday, I forgot my PIN number while at the cash machine and had to cancel the transaction and go away and think about it for a while. Today, I froze mid-pitch, utterly unable to remember what I was going to say. Probably only lasted 30 seconds but felt like the world stood still as I floundered for words that weren't there.

I'm convinced it's the lack of sleep and not the booze. So today, I'm playing catch up and am posting two beers in one day - like the beer-toting maverick I quite clearly am. First up is a rather frisky, feisty little number while the second is a much headier, imposing ale that will mean I need a long sit down afterwards, no doubt. 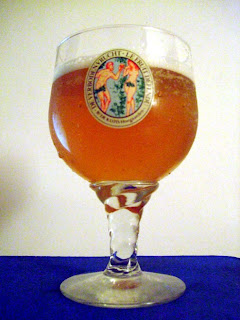 Beer: Brew Dog Storm
Country: Made in Scotland from girders
Strength: 8%
Colour: Disconcertingly lager-coloured
Smell: Single malt whisky, combined with peaches and tangerines
Circumstance: Just back from a pitch to do a staff magazine for National Express. It didn't go all that well, so catching up on the beer blog is just what the doctor ordered.
Tasting notes: Might as well be a whisky and soda. The almost-overpowering stench of whisky permeates the nasal passages and gives the drinker a clue to what's coming next, to wit, a sudden and not unexpected assault on the tastebuds. It's not entirely unpleasant, but it's not really what I want from an IPA. That said, it doesn't half slake the thirst. Crisp and smooth at the same time, this beer delivers a strong and insistent slice of peat that gives the sharpness some shape, then wanders to the back of your tongue leaving a slug-trail of whisky delights in its wake. The combination flirts with the kind of crass nonsense the French seem to like, such as Desperados or demi-pêche, but just about errs on the right side of that tightrope and is winning me over. But then I really like single-malt whisky and IPA.
Drinkability: Not bad. It's light enough to slug back fairly easily despite it's hefty alcohol count. In fact, I had a double-take when I saw the label because there's no way this drinks like the heavyweight it is.
Gut reaction: Not too bad, actually. Really surprising, because I thought I'd be storing up a whole world of trouble with this feller. It's a touch on the gassy side, but not enough to make things uncomfortable.
Session factor: Relatively low. You'd just order whisky chasers instead to get the best of both worlds. I don't think I'd attempt more than two of these at any one sitting, especially given how bloody strong it is. 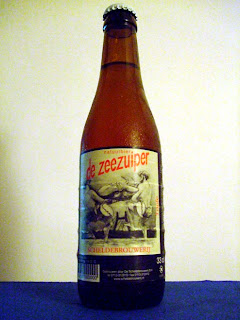 Beer: de Zeezuiper
Country: The Netherlands
Strength: 8% again.
Colour: Like the smashing orangey bit in a jaffa cake gone stale
Smell: Menacingly strong
Circumstance: Listening to Purple Radio in an attempt to wind down from what's been a hectic kids' bedtime 'hour' (read three).
Tasting notes: A bit like Victoria sponge cake at first. It definitely tastes as strong as it is, unlike the previous one. Very rounded and pungent to start with, a bit cloying but not overly so, slightly oily, but then it dries out in the finish and stays with you for a fair while. It's heavy going, though. There's a lot going on here and I'm sure there'll be more as I get further through the glass. See, I'm now getting nettle soup in the mix. Bloody odd ale.
Drinkability: Funny one, this. It's a great big clod-hopper of a beer, but something about the finish makes you want more. But then the smell puts you off. It can't make its mind up - it'd be bisexual if it had sex, something I wouldn't put past it judging by the label, which appears to be two blokes trying to shag a giant crab.
Gut reaction: Given this has a fair bit of sediment in it, I reckon it could be volatile.
Session factor: Lower than whaleshit. While there's a tiny bit of moreishness about the finish, you honestly don't want to be having a rake of this beer. Unless your idea of a good time is attempting to spit-roast a massive crustacean, in which case, bottoms up. 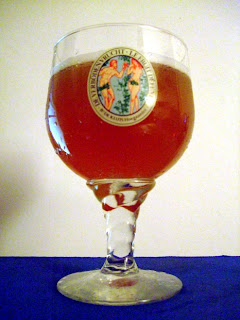