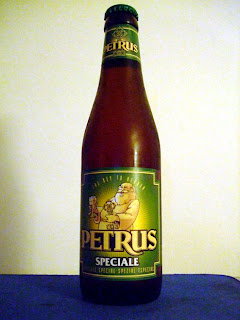 I've been a mite slack of late, I realise. It's four days since I last posted about beer and I haven't managed to open any more of the calendar beers in that time. Pathetic really.

My only defence is that I didn't have the calendar with me. It's at work, you see. And not having been in work on Friday meant I didn't manage to bring the weekend's supply home for sampling.

Now I could have just shrugged my shoulders, headed for the nearest Morrison's and laid in a load of renegade ale and none of you would have known the difference. But I would. It wouldn't have felt right. I'd have been pulling the beery wool over your eyes and we can't have that.

So this week is gonna be spent playing catch-up. Like I'm on some ale-themed Going For Gold and I get to go first. My plan was to spend tonight getting through at least the last few nights' booze, but my youngest daughter Ruby had other ideas, so instead I spent it reading Down with the Daisies and The Snail and the Whale. Many, many times.

To make matters worse, the camera battery had decided to pack up, so I need to recharge it before I can upload the pictures. If I didn't know myself better, I'd accuse myself of being a rank amateur. Anyhow, enough prevarication. I'll be lucky to post two tonight, but as I'm sure you all know, I'll do my level best. 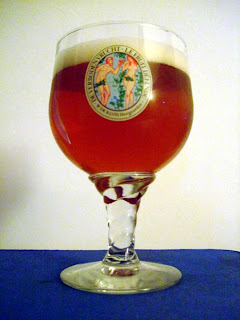 Beer: Petrus Speciale
Country: Belgium
Strength: 5.5%
Colour: Firside glow orange
Smell: Fruity and pungent, with a hint of asafoetida
Circumstance: Bloody pissed off. I've just spent the past two and a half hours trying to get the youngest little darling to sleep, a Herculean task at the best of times. I was also gonna do some catching up tonight, but that's unlikely now.
Tasting notes: It's first act is to come snarling and spitting at me like a stick-enraged cobra bent on plunging venom into my tastebuds, but after that brief, frenzied attack, it curls up in a little ball and acts more like a slow worm under the influence of methadone. There's a stab of citrus here and a shiver of bitterness there, but on the whole it drains away rather disappointingly and, although fairly nice, isn't as special as its name would have you believe.
Drinkability: Pretty good. It's not too gassy and the abrupt finish makes you call again Oliver Twist-like for a bit more.
Gut reaction: Not especially volatile. Fizzier than a standard ale, but not likely to invoke more than a cursory belch or two.
Session factor: Rather good, I'd say. I've nearly polished this one off in the time it's taken to write this brief review and I'm not feeling at all subdued, so I'd think I could handle a fair few of these. 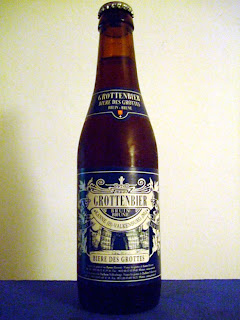 Beer: Grottenbier
Country: Belgium
Strength: 6.5%
Colour: Conker brown
Smell: Doughy and raisin-filled. Like a fresh slice of Stollen
Circumstance: Mood somewhat improved by the alcohol of the last one getting to work on the pleasure receptors
Tasting notes: There are big, bold caramels and liquorices here, as you'd expect from a brown beer made by Belgian Trappist monks. It's robust, knockabout, stocky and thick-necked, with an aggressive demeanour but it's heart's in the right place. Not the kind of beer you'd want your daughter to bring home, although you know it would have been extremely loyal and would have walked her home in the dark. Finish is pleasingly rounded with baked apples.
Drinkability: Like any stodge, you're not going to be able to stack too many away, but you'll want to.
Gut reaction: Too early to say. A slow-burner of an ale, I'd say. While I'm feeling fine now, the missus may bear the brunt of a particularly well-heated Dutch oven later.
Session factor: Not so good, but I'd be happy to take a few by a roaring fireside before trekking off through the snow with the poor man of Good King Wenceslas fame. 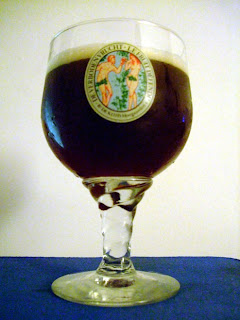