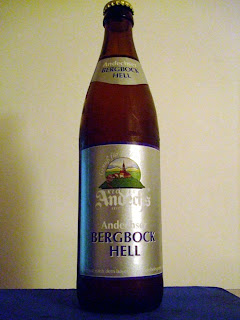 Long day today and Hell at the end of it. Well, that's what it says on the bottle and I've seen nothing to persuade me it'll be anything otherwise.

I told the people at Utobeer that I don't really like lager, but that I'd like some German beers. OK, what was I thinking? Germany is known the world over for its pilsener-type beers, which is essentially what lager is.

So pouring this one out is a bit of a disappointment, to tell the truth. I feel let down by the vendors, who clearly haven't listened. To add to my sense of irk, the bloody thing's out of date as well. Best before 17 December 2008. This isn't looking remotely promising.

The beer's called Andechser Bergbock Hell, but it might as well be called Impending Arse Hell, because that's what I'm expecting tomorrow morning.

There is some good news, though. The next one up is a Maisel's Weisse Dunkel, so if this one's terrible, I at least have a reputedly good consolation. 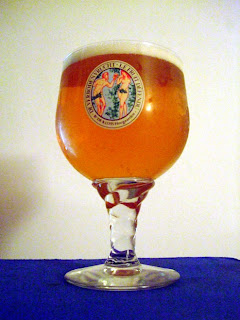 Beer: Andechser Bergbock Hell
Country: Germany.
Strength: 6.9%
Colour: Marginally opaque lager, maybe a touch darker than the usual
Smell: Sharp and sour citrus fruits. Possibly because of the date.
Circumstance: The day after it should have been drunk before. End of a long day, about to drink off lager. Great. Just terrific.
Tasting notes: Really not bad. While it starts off depressingly lagery, it develops into a much superior brew. The sharp citrus flavours bloom into a light but robust thirst-quencher with a distinctive character that I've rarely tasted in lager. You actually get a reasonably lengthy finish that doesn't make you want to retch, so this is definitely a different beast. The label says it's a Bergbock Hell beer, which should mean it's not a standard lager, and the taste would certainly back that up. I could get used to this.
Drinkability: Surprisingly good. Goes down fairly easily and isn't gag-inducing at all.
Gut reaction: Fair so far, but there's gas in them thar bubbles, so I'm expecting belching later
Session factor: Upwards of middling. While you could certainly slosh a few back, there's the strength to take into account.
Posted by Eddie Grace at 22:08