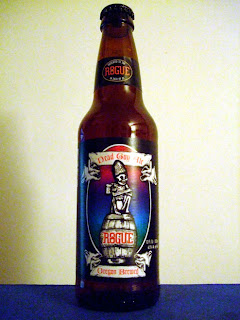 That which we call a rose. By any other name would smell as sweet.

If you'll pardon the jaunt into Shakespearean eulogising, that particular line could have been invented for this beer. My experience so far with American beers hasn't been an unqualified success, so it was with a modicum of suspicion that I greeted the appearance of an Oregon brew named Dead Guy Ale.

Surely this is going to smell and taste of rotting US corpse? Is this some kind of beer the CSI crew drink after work as a way of de-stigmatising death? Why do the Seppos need to call their beers such daft names?

Not all of those questions was answered, but the first was a resounding 'no'. Maybe I'm bigging it up now because I was expecting it to be a bit shit, but this is up there with the best I've tried so far. Really excellent. Depth. Character. Charm. A sense of irony. All qualities for which our American cousins are so well known. How could I have thought it would be anything different? 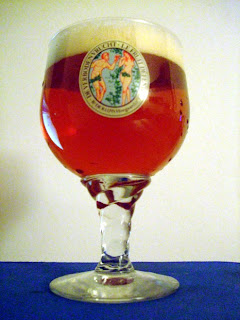 Beer: Dead Guy Ale
Country: USA
Colour: Sunset orange
Strength: 6.5%
Smell: Freshly buttered toast.
Circumstance: Just about to chow down, as the good burghers of this ale's native town might say
Tasting notes: Nice, this one. Biscuity beginning with a hint of peach yields up a lovely, buzz-saw bitterness that surfs down a wave of the cascading saliva of your appreciative tongue. As with waves, this one washes back and forth until it settles on a blissed-out, sun-kissed beach of contentment. I fucking really like this stuff.
Drinkability: Extremely good. It's taken barely a minute to get through half of this, such is its moreishness.
Gut reaction: Despite its strength, I don't think this one is going to cause much trouble. Rather it pours calming oil on troubled, acid tummies.
Session factor: Not huge, but I wouldn't mind working my way through a few of these beauties. This is a tasty beer.
Posted by Eddie Grace at 21:01