Korn in the USA 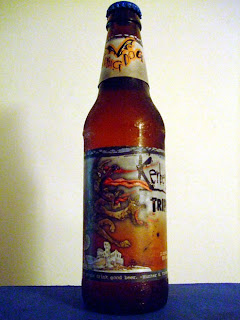 Not this bunch of kocks again. Kan't believe I bought more than one of these inferior beers from the US that go under the label Flying Dog.

It's been that sort of a day, really. Sod's law at every turn, then I kome to krack open a beer from the advent kalendar and I'm faked with this. Flying Dog has brewed a Triple, so they've bunged the three-headed dog of Greek mythology on the label. So far, so-so, but, get this. They've kome up with the fakinating ruse of kalling it Kerberos.

Oh ho, ho, fucking ho. That's klever, isn't it? Must have taken a highly paid fokus group whole seconds to konjure up that one. OK, so maybe I'm deskending to their level, but so what? I'm already put off by the uber-trendy Steadman-illustrated label (shame on you, Ralph) without their having to resort to the kind of 'down with the kids' spelling that's almost certain to alienate beer drinkers as well as those 'kids' they're trying to 'get down' with.

Besides which, you kan't even drink this if you're under 21, which interestingly enough is around about the age where people usually klaw themselves out of their adoleskent taste desert and see this kind of patronising klap-trap Flying Dog's marketing department has dreamt up for what it really is.

I barely kare what the beer tastes like now. Let's hope it's a pile of krap so I kan karry on sticking the boot in. 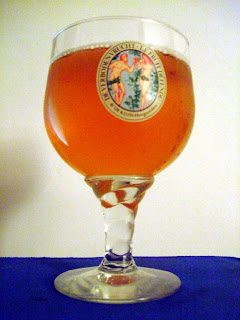 Beer: Flying Dog Kerberos Tripel
Country: USA
Strength: 8.5%
Colour: Infant-piss yellow
Smell: Off kider or skrumpy mixed with three-day-damp dishkloth
Circumstance: End of a fairly full-on stressful day filled with shopping, arguments, badly behaved offspring and disappointing football results
Tasting notes: Kunt. After all this, it doesn't even have the dekenky to taste krap. I'm disappointed. There's aktually an interesting, fairly spiky beginning, which then kreates a great big buffalo of firm fruitiness - I'm picking up dates and blackkurrants - that swaggers off konfidently after it's left its kalling kard
Drinkability: It is a touch on the strong side and the flavour lets you know that, so konsequently it's not easy to quaff. That said, it's not vile by any stretch.
Gut reaction: Kould be problematik. Nothing untoward so far, but there is sediment present, so tread karefully.
Session factor: At the lower end of the skale. Even though it tastes perfektly akkeptable, I just kouldn't bring myself to buy another.
Posted by Eddie Grace at 20:17