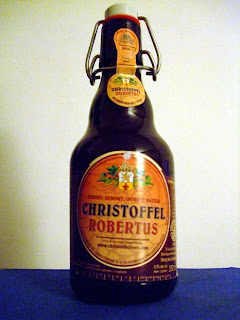 First off, let's start by saying that I'm massively unimpressed. This is quite frankly not on.

When I open a bottle of beer, I don't expect to lose more than half of it on the floor because its 'pop-off' bottle top and immensely fizzy comportment combine to make Champagne look decidedly flat. It literally billowed over the sides of the bottle like some mad scientist's gone-wrong experiment

So since I'm operating on half measures, I'm gonna keep this brief. If you've any problem with that, take it up with the pissing brewery's management and tell them not to make their beer too fizzy while you're at it.

Honestly, it's just hugely disappointing, especially when the beer itself looks, smells and tastes really quite good.

But the Beer Advent Calendar is all about the full experience, I'm afraid, and that means this one's gonna suffer. 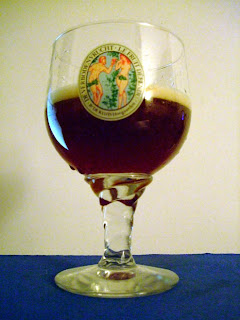 Beer: Christoffel Robertus
Country: The Netherlands. A flat country. You couldn't make it up.
Strength: 6%
Colour: Rusty brown
Smell: Fairly sweet, almost like toffee apples
Circumstance: Having just mopped half of the fucking thing up off the cocking floor.
Tasting notes: It's OK, I suppose. Actually it's really nice, sparkling with lovely citrusy sharpness, then bowling around like a big ball of Jamaica Ginger Cake before flattening off towards the finish. It's a bit fizzy too, not sure I've mentioned that.
Drinkability: Good. If a bit fizzy.
Gut reaction: It's fizzy, so there's belching aplenty.
Session factor: Minimal. Unless you can shift your wind efficiently. Because it's somewhat fizzy and will probably fill you up after two.
Posted by Eddie Grace at 20:06

Here's hoping you get full measure of the next bottle. You sounded distinctly unimpressed, and certainly didn't deserve to lose half the bottle para los spiritos.

Keep up the good work, and sacrifice in the name of beer.

I was secretly hoping it tasted gopping, which made the spillage doubly disappointing.

heh, that glass is definately half full mate ; )