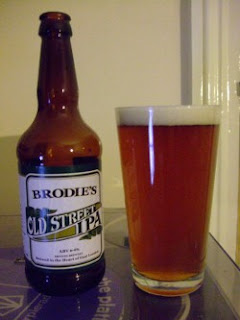 If there's one weekend I've gained a huge insight into my own limitations, this was it. It's time to pack it up and admit I'm no longer a young, resilient man. Time was I could go out on a Friday night and still have the energy to carry on right the way through the weekend. But no more.

And that's why I'm only just getting round to updating the calendar. Instead of being sensible on Friday evening, I decided I could push the boat out, what with it being the last weekend before Christmas and all. This was an error. After struggling through to 3pm yesterday, I returned home and spent the rest of the day in such a state of delicacy I could barely move.

In fairness, I have developed a survival mechanism that meant I wisely avoided alcohol completely, but that gives me the arduous task of downing three tonight. Fortunately, only one is 500ml, so at least it shouldn't be too much of a struggle. 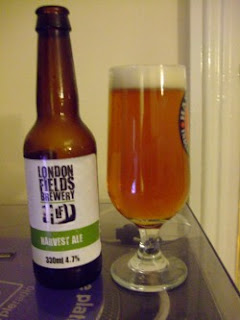 What the weekend has made me think about is the wisdom of continuing with this tradition. I've never managed to complete one without having to catch up at some point and that's pretty embarrassing. It's only a beer a day. But there's the rub. If I'm going out during what's traditionally the season of overindulgence, it can end up being many more than one beer a day, which can occasionally prove too many. Something's got to give.

And that can mean one of two things. Grow up a bit or stop doing the calendar. This time next year, I'll be a year older, so we'll see how it goes.

Beer: Brodie's Old Street IPA
Strength: A disconcerting 6.4%
Colour: The warm orange glow of a setting sun.
Smell: Bruised peaches and comice pears.
Tasting notes: Unlike the smell, there is absolutely nothing sweet about this at all. It's sharp and tart from the off and it's downhill (or uphill, depending on your viewpoint) from there to the finish, which seems to go on an age. In a way, this bitterness provides the perfect counterpoint to the bountiful fruit of the bouquet or at the very least a sharp contrast. Whether or not it actually tastes nice is a moot point. Perhaps for the first five seconds or so it works nicely, but the back end of the finish almost tastes like the painful sting of bile, so on balance, I'm happy I've only got one to drink.
Gut reaction: Despite the after taste and the relatively high carbonation, I'm not expecting it to be that vicious.
Session factor: Fairly low, especially at this strength.
Arbitrary score: 14

Beer: London Fields Brewery Harvest Ale
Strength: A more humane 4.7%
Colour: The same setting sun as above, only around 20 minutes beforehand.
Smell: Not much, really, but somewhat worryingly, the only thing I can pick out is five-year-old emulsion paint
Tasting notes: A little watery at first, disappointingly. Then there's an overpowering hit of how I imagine a 30-odd year old thatched roof would taste like if you dipped it in a large puddle, bunged the lot in a Moulinex and mixed it with several pans of potato water. Thankfully, that doesn't last the course and you're treated to a slowly fading bitter finish that does its level best to (and largely succeeds in) washing that fusty taste away.
Gut reaction: Again, no issues predicted with this. It just doesn't have enough about it to threaten.
Session factor: Not too bad, really. The sharp finish almost makes you forget the generally poor taste of it.
Arbitrary score: 3.5 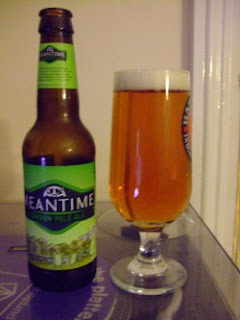 Beer: Meantime London Pale Ale
Strength: A reassuringly weak 4.3%
Colour: Barely disguised lager
Smell: Barely disguised lager
Tasting notes: Barely dis... OK, it's not that bad, but there isn't really a great deal to say about this one. I expect it's designed for drinking quite a lot of on hot summer days, but since this is the middle of winter and I'm still feeling rather unenthusiastic about beer, it seems a mite out of place. Like lager, it's sharp from the off and has a fairly dank finish. It's pretty gassy too and were it not for the label telling me this is a pale ale, I'd say it was lager by another name.
Gut reaction: Although not strong, it's got plenty of gas and has already had me burping with gusto.
Session factor: High.
Arbitrary score: 62%
Posted by Eddie Grace at 21:17

That Meantime London Pale Ale has such a beautiful label that I keep drinking it, hoping each time that it will somehow be better. It never is. Such a disappointment because I'm sure Meantime could do a lovely pale ale if they put some effort in.

Yep, agreed. Had higher hopes for that one, but was disappointed. And yes, I'm pretty sure they could do better with a bit more effort. See also Brew Dog.