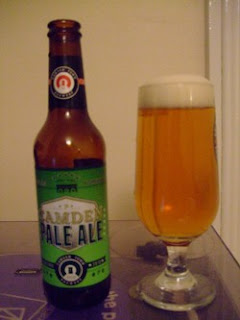 More observant readers will have spotted the lack of update yesterday. This was due to technical reasons, to wit, I was unable to operate the keyboard having been on an extended trip to The Rake in Borough.


Regulars will be only too aware updates can be less-than-clockwork as December wears on, what with it being the party season and all. The intention was there but sadly the ability was absent. Never mind. It does mean I get to have two this evening, so every cloud... 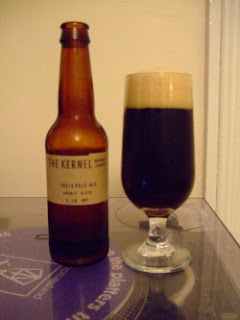 And this evening's drinks couldn't be more different if they tried. One from north London; one from south. One easily sourced; the other a bit of a chore to lay in. One pale; the other black. But both made by fairly small brewers based in Network Rail properties (or railway arches, to the uninitiated).

So take a bow Camden Pale Ale and Kernel Double Black IPA. I've had both before and they each have their merits. Camden Pale Ale is a terrific keg beer that's a go-to pint whenever you see it in a bar. I believe they have it on at The Social and it's exactly what I'd be drinking were I there.

Kernel's Double Black IPA is a thing of wonder. I can't quite put my finger on why it's better than the standard Black IPA they do, but it just is. It's unfair to compare the two as they're completely different beers, so I won't.

I'm glad it's the Camden Pale Ale first, though.

Beer: Camden Pale Ale
Strength: A paltry 4.5%
Colour: Insipid pigs urine
Smell: Honeysuckle
Tasting notes: If ever there was a beer designed to be a session ale, this is it. The nicely floral aroma is carried over into the first gulp, but that quickly disappears. Next up is a rasping citrus zest that feels not unlike a lemony spike strip 'stinger' puncturing the tyre walls of your taste buds. This is the very epitome of refreshing, especially as the lingering finish drags on and tempts you into another swig.
Gut reaction: Only issue with the beer is it's quite a belch-bringer.
Session factor: Large. Fairly low ABV, light, refreshing. It's got everything a session ale needs.
Arbitrary score: 28

Beer: Kernel Double Black IPA
Strength: A wonderful and frightening 9.8%
Colour: Mahogany
Smell: Molasses and marzipan
Tasting notes: This is huge. A genuinely massive beer. Lovely big dollop of treacle on the tongue, laced with the finest sherbet, then comes the sharp, tart taste of Granny Smith's apple and a wave of malty Marmite that has what I imagine is the flavour of anchovy-stuffed olives in rock salt. And it is a wave as that salty sensation surfs along the surface of your tongue. It has a half-life of at least a couple of minutes too, so you can afford to savour and marvel at how you can possibly pack this much punch in such a small glass. Sensational stuff.
Gut reaction: It feels fairly soothing, but at 9.8% you can never be certain.
Session factor: Negligible. This is hard, if satisfying, work.
Arbitrary score: 254/3

I'm a bit late to your advent calendar but am enjoying it so far. It sounds an easy task - one beer a night - but I can appreciate how hard it must be during December, especially as you may have had numerous beers beforehand. And you still write sense, tremendous.

Oh, and the crate thing is great too - I presume you know what's coming next or does someone mix it up for you?

Cheers, squire. As for the crate thing, I have no idea what's coming next. Keeps it interesting. :D