Come Wandle with me 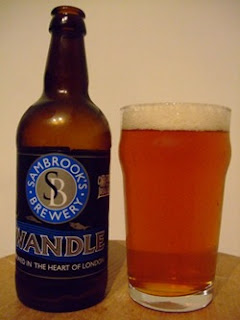 Christmas Eve is here and off we go to bed. Except that we don't. Not all of us. For there are still one of two bits of unfinished business to attend to, including presents to wrap (all of them) and the last of the beers to get through.

In truth, I'm not really looking forward to it and I might well leave one of them till tomorrow. The back end of this stinker of a cold along with the tiredness only a two-day break in Amsterdam can bring about has taken some of the enthusiasm away.

And well it might. I had a long day yesterday that started out in a hotel near Leidseplein, took in a Vlaamse Frites takeaway joint, a cookie shop, the Belgian beer bar, a full-on bonkers bike ride in the famous Amsterdam drizzle, the Burger Meester, a second-floor flat atop a mental spiral staircase and a mad dash to the airport.

As is often the way with these things, the ability to chat freely and easily with fellow barflies can open up whole worlds of possibilities and yesterday was no exception. I'll never forget hurtling along cobbled streets in the front of a trolley bike with an unkempt dog barking for all he was worth and cars screeching to a halt in their eagerness to give way to the pedal-powered vehicle. I'm told bike is king in Holland and they frown on car/bike interfaces. It's always the car driver's fault no matter who is really in the wrong - a good way of running things if you ask me.

Even despite the relatively early night I had, I still woke up this morning feeling like I needed another few hours. And it's only now, almost 24 hours since I left the place, that I'm beginning to feel like I've shaken off the cloying, debilitating blanket Amsterdam tends to wrap you in.

But in just a few hours' time, all this will be forgotten. Beer will be drunk, presents will be wrapped and the hour when I can sleep again will be upon me. And then it's Christmas.


Beer: Sambrook's Wandle
Strength: A mercifully manageable 4.2%
Colour:Mash tun copper.
Smell: First impression was of a slight vinegary feel, but that must have been the salad dressing I had earlier. It has a distinctly earthy aroma about it, though. Trodden earth like you get in parks.
Tasting notes: There isn't much wrong with this at all. Brewed slightly stronger than its draught counterpart, it's nevertheless a classic session beer that has just enough body about it to hold its own while also having that gentle hoppy aftertaste that begs another helping. While there are no big flavours here, there is everything you'd want in a beer of this nature. Light, refreshing, easy on the eye and unburdened by pretension or ostentation.
Gut reaction: It's a bit belchy, but nothing overly dramatic.
Session factor: Stratospheric.
Arbitrary score:140