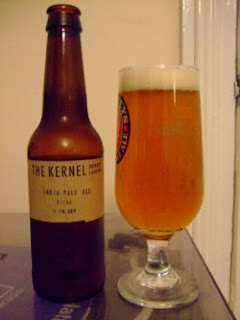 Monday. A busy week ahead. Nowhere near enough sleep as you fought valiantly the duvet demons and bravely battled the trolling mind. Early start. Things to do. Freezing cold. General Monday misery.

And yet spirits have remained surprisingly high despite the many faceted beast that is the beginning of the working week.

Why? The door through the fifth day of December brings me a Kernel Citra IPA, that's why. I've got form with this stuff. That is to say, I've had it before and it's terrific. So while beavering away in an office that must have been too cold to be entirely legal, I was warmed by the prospect of sinking this one tonight.

In fact, the only downside of cracking a beer this good is the fear your words won't do it justice. Ideally, the review would fit the beer, but often when faced with such high quality, it's tricky thinking of anything worthwhile to say about it.

It tastes nice. I like it. I could go another one of these. See? It's like being a tongue-tied teenager unable to utter anything even remotely comprehensible to that girl you fancy. Charlie Brown clamming up when he finally summons up the nerve to talk to 'that little red-haired girl'. Sometimes there just aren't any words there and I'm worried that'll happen tonight. It would be easier describing a can of Carling Black Label.

Or maybe the alcohol content will unlock the loquaciousness and I'll ramble on all evening eulogising about its nectar-like properties?

Sometimes, there's only one way to find out.

Beer: Kernel Citra IPA
Strength: 6.6%
Colour: A Gorgeous golden orange
Smell: Like writhing around in a sandpit full of lychee flowers.
Tasting notes: I think this is the best beer I've had all year. And I've had some extremely good beers. Right from the off, this screams quality and artisanship. For something that smells so powerful, this is a really subtle beer. An initial sugary hit that reminds me for all the world of those shiny orange sweets you can get in Indian shops gradually fizzles out into a long, flowing taffeta train of a finish. And it's a delightfully delicate zest of a finish too, like someone repeatedly dabbing a peeled segment of mandarin orange on to your tongue with all the care and attention of a mother soothing her child's grazed knee. I reckon even people who profess to not like beer would like this. Completely delicious.
Gut reaction: I don't care. It could make me fart with the force of a Rolls-Royce Trent 900 and I wouldn't mind.
Session factor: Despite the potency, I'd gladly drink this all night. Honestly wish I'd bought several more.
Arbitrary score: 100
Posted by Eddie Grace at 20:03

I want one NOW. I'm a long way from the UK but it sounds worth a trip home.

I want another few. :D

I sent my brother in law home a few of these. Wish I'd have kept some.

sounds ace.
Never heard of it before - will look out for it!

I think I'm going to have to visit mr L on the way home tomorrow and grab me some of Evin's glorious Scott's nectar. You've reminded me how damned fine it is.

Did you really eat one of those orange Indian sweets?

Only once and the taste has stayed with me to this day.