Stout of this world 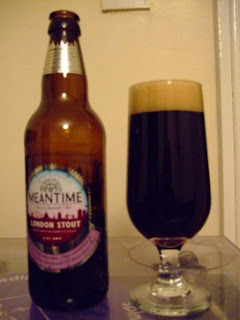 Difficult day today so apologies for the lateness. Actually, fuck that. I'm not sorry. It's at least on the right date, so that's good enough for me.

What made it difficult was the combination of a great night out and an early start this morning. On a miserable December evening characterised by too much rain and not enough degrees, I struck out for Stoke Newington and the sanctuary of the Jolly Butchers. I may have tried one too many there before heading down to the Vortex in Dalston for a gig. The Memory Band, if you were wondering. Highly enjoyable.

But in the back of my mind all night was the thought of having to conduct an interview at 7.45 the following morning to fit in with some git's ludicrous timetable. Doubly galling, then, that he was only too happy to rearrange it till this afternoon when he realised he didn't have the right document with him. Thanks.

In truth, I haven't really been looking forward to this. While it was pleasantly surprising to find passable ales at the gig venue last night, it's done nothing for my head or stomach today. The prospect of drinking hasn't been one I've been relishing at all today, so it really feels like I'm forcing this one down.

That's right. Forcing. Like it's some kind of hardship.

Beer: Meantime London Stout
Strength: 4.5%
Colour: Black
Smell: Roasted black treacle. It's pretty pungent.
Tasting notes: Oh, how terrifically smooth. I wasn't really holding out any high hopes for this, but it's really impressive. Plummier than a member of the landed gentry and with a velvety cravat straight out of Jeeves and Wooster, Meantime London Stout is also insanely moreish. And that's down to the finish, which is like a steadily sloping gradient from fulsome to rasping. Just what you need to encourage another sip.
Gut reaction: How can something this mellow cause any ill? I go so far as to say you could use this instead of Gaviscon.
Session factor: Not high, but I'd like a few more all the same.
Arbitrary score: Six-nil