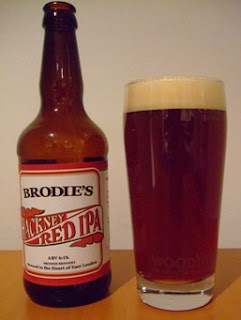 Off we go and, blow me, if it isn’t a high-strength IPA. Unsurprising really, as I’ve a few of these dotted around the calendar, reflecting the huge upsurge in popularity of these ales in the last couple of years.

You'll already know the story of India Pale Ales and, if you don't, I'll assume you're probably not all that interested. Something to do with hops, strength and the long voyage to India on slow-moving boats. What marks the latest breed out from the more traditional varieties is their use of so-called 'new world' hops such as Citra, Simcoe and Nelson Sauvin. I realise I'm drifting alarmingly into wine critic territory here; suffice it to say they smell and taste a lot bigger than their forebears.

In a way, that's been a good thing. They've changed the game and have thrown down a beery gauntlet to the old guard. Trouble is, as with anything really, once a bandwaggon gets rolling, any old chancer will try and jump on it. This inevitably leads to dick-measuring one-upmanship, arms-race jostling for superiority and eventual saturation that ultimately breeds brown-shoed bores bleating on about how much they preferred the original. Optimistic outlook, eh?

The signs are already there. The last six months have produced an alarming array of ever-more outlandishly named 'look-how-many-different-types-of-hops-I've-stuffed-in-here' IPAs that have contributed in no small part to the world running out of the more exotic varieties of hops. In years to come, people will look back misty-eyed at the 'great hop drought' of  2011. It hasn't quite caused fights between brewers at hop suppliers, but those days can't be far off. You can also get different coloured ones too. Black IPA, red IPA, green IPA. And worryingly, this trend has crossed over to stouts and porters too - next up, a white porter. Where will it end?

Thankfully, some brewers laid in their supplies long ago and are quietly going about their business of making quality, interesting IPAs that have enough about them to excite the palate but aren't so overbearing you don't know whether you're drinking beer or going down on a cannabis flower.

Brodies is one of them. In what looks like a small coal shed outside an old Victorian boozer in Leyton (see Beer Advent Calendar passim), the team there brews a pleasing range of well put-together ales. Most of which they sell in the pub at the frankly risible price of £1.99 a pint. Thankfully, they bottle a lot of it and flog it at a far more wallet-relieving price in a limited number of London outlets.

Not only that, their naming convention falls just the right side of the ludicrous line, so they've a few representatives in this year's calendar.

Eagle-eyed calendar followers will have spotted a couple of cosmetic changes to the format this year. This is purely down to time constraints, but it should improve readability. Brevity, I'm told, is the watchword these days, so it's unlikely I'll ramble on at this length in subsequent posts and I've dropped one or two of the categories below.

I am, however, happy to engage people in banter/answer questions/argue the toss/accept compliments in the comments section, so feel free to use that facility as often as you like.

Beer: Brodies Hackney Red IPA
Strength: 6.1%
Colour: *sigh* red. Well, not that red, actually. More damp conker.
Smell: Difficult to put my finger on this one. It's a cross between sponge fingers, stale fruitcake, week-old sawdust and soaked cardboard boxes, like the type you find outside northern supermarkets. Yes, the sawdust and the boxes.
Tasting notes: Not as complex as I thought it would be from the smell. Disappointingly, it's exactly what I'd expect from something called Hackney Red. It's a Man U fan of a beer; one that's never seen north of Watford, never mind the streets of Salford. Oh sure, it knows all the facts and figures, but ask it what bus to catch from Piccadilly Gardens to Old Trafford and it looks at you blankly. That is to say, on the surface, it seems the genuine article. Nice rounded hit up front and sharp at the end. But with every peeling away of the flavour veneer, so a level of authenticity disappears too. What starts out reasonably promisingly ends up overly sour and grasping desperately for acceptance. Should have supported its local club, really.
Gut reaction: It's fortunately quite subtly carbonated, so I'm not anticipating too many ructions despite its cloudy appearance.
Session factor: As viable as Man U playing in the next round of the Carling Cup.
Arbitrary score: 1-2

Oh and on the 'silly IPA' front I had the Arbor Ales 500 minute IPA a couple of weeks back (500 additions of hops one per minute of the boil - 10.something % and unbelievable. Couldn't taste a damn thing properly after it)

The hops obsession many craft brewers (and craft beer drinkers) have really is becoming rather wearying. Here in Australia, following the lead of the American brewers, there's every sign that summer is going to be dominated by "double IPAs": all the brewers are cramming in more hops and more alcohol; but more subtlety? More balance? More variety? Not a chance.

I hear you, Harry. Some brewers do it brilliantly, but there are others who adopt the willy-nilly approach and fail as a result. It's like playing for position in a game of snooker and failing to pot the ball. They seem to have lost sight of the 'why?' in pursuit of the 'what?', if that makes sense.

The most egregious example I've yet come across is North Coast Brewery's Old Rasputin Russian Imperial Stout. When the dominant flavour of an imperial stout, of all things, is "hoppy", I think it's time to admit that there's a problem. But then, as I said to a guy in a bottleshop recently, I'm a malt man living in a hops world.

See, I like hops. Big fan. But not overly fond of the scatter-gun approach seemingly adopted by many brewers these days. But I'd agree malts tend to be overlooked these days in pursuit of the bitterness.