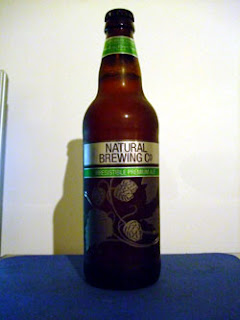 A massively bold claim and, in fact, overstatement for this beer, dubbed Irresistible Premium Ale (IPA for short, then).

But it works terrifically hard and I respect that, especially after the week I've had. And I admire that in a beer. So never mind that it's really not the best ale in the world, or even particularly irresistible, as it claims on the label. It has soul.

Which brings me to another beer that I will include in this year's calendar: Shepherd Neame Master Brew. Now I've had people whose opinion I mostly respect have a real dig at that poor, much maligned tipple, but it's got to stop. There's honesty and integrity in middling triers such as these - who are we to smite them down just because their names make claims they can rarely back up? We don't scoff at people named 'King' who aren't really actual kings, so why castigate a beer that has the audacity to call itself something slightly grander than it actually is? The world needs beers such like Master Brew and Irresistible Premium Ale. No matter that they aren't the best - they're tremendous at what they do.

I know Master Brew isn't the best beer in the world, just like this Natural Brewing Company Irresistible Premium Ale is entirely resistible. But give it some credit; it's aiming at the stars. And performing its role to a fault.

But back to tonight's ale, which is brewed by one JJ Herrington (Brewmaster). Now it's unlikely JJ is the greatest brewer on earth, but I don't for one second begrudge him dubbing himself a brewmaster because he's really come up with a solid beer here. It's even more than a trier - it's achieved already. So much so that I'm already contemplating heading back to Sainsbury's to see if there's any left.

That's all the success this beer needs. And I raise my glass (of it) to it. 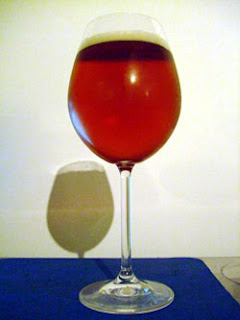 Beer: Irresistible Premium Ale
Country: England
Strength: A hardly irresistible 4.3%
Colour: A ruddy, autumnal gold that screams fireside
Smell: Mildly singed flapjack with a side-order of fresh peaches
Circumstance: At the advent of the weekend. A night of slouching and listening to Purple Radio beckons, through the power of the mighty RadioTuna. And seemingly mid-pimp as well.
Tasting notes: Sharp as a tack with undertones of grapefruit and Malted Milk biscuits. There isn't too much in the middle before it tapers off, but that's no bad thing. It's a quick hit of bitterness that's really refreshing and exactly fit for purpose. It's not irresistible by any means, but it's extremely good for gulping down. And that's pretty much what I'm doing.
Drinkability: It's in the top three I've had so far this calendar and that's no mean feat considering the company it's keeping. From the first sniff to the last vestiges of the finish, it ticks all the boxes you'd want in a glugger.
Gut reaction: There is some gas about it, so I wouldn't down it as quickly as I appear to be doing right now.
Session factor: Considerable. It cuts through thirst, tickles the tastebuds and wipes its feet on the way out. Thank you, may I have another?
VFM: 9.7. The only thing that marks this down is the relatively low alcohol content, i.e. it's not gonna get you roaring after a couple of bottles. Otherwise, at £1.5o a pop, it's nearly unbeatable.
Posted by Eddie Grace at 19:48