Smoke on the porter 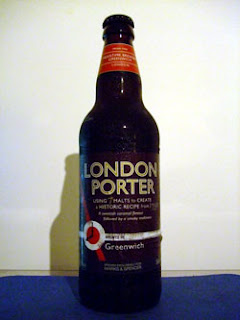 There was a brief moment this evening when I felt like I actually enjoyed my real job. It was fleeting and didn't last, but it was there and it disturbed me.

A congratulatory event designed to patronise people who've done their job well, it nevertheless showed me why I used to enjoy the cut and thrust of being a reporter. On reflection, what I actually did was butt into people's conversations and stop them enjoying themselves quite as much as they would have done had I not been there. Short-lived job satisfaction, then.

I'm also told that my plans for a front page have been shat on by the weather and various issues with inaccessibility, so all-in-all it's been an unrewarding day. These are becoming more frequent every week; I need to reassess what I do for a living.

Would that I could be paid for this. Would that be fair? Would I come to regard this as mere work to be dealt with? Would it pall? Would routine become the dullness of a million post office queues? Would be worth finding out, though, wouldn't it?

I don't even want this beer tonight, if the truth be known. Not really. I just want to go to bed. But some poor sod has gone out and scraped together seven different malts to put this bottle of Porter together, so I guess I should at least give it a whirl.

This is brewed just down the road in Greenwich, by the Meantime brewery under licence. I've an ambivalent relationship with them. Some of their beers are good, but I always have the impression they're being a mite gimicky with their range. Happy to be proven otherwise, as ever, but I feel their relationship with M&S adds creedence to my notion they're cynically commercial rather than benignly eclectic.

Or maybe I'm just being a miserable sod? Only time will tell.

This post has been brought to you today by the habitual uplifting and jovial demeanour of Mark E Smith. 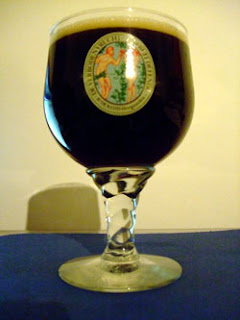 Beer: Marks & Spencer London Porter
Country: London, England
Strength: A portly 5.5%
Colour: Tarred Vimto.
Smell: Marmite. Marmite used like Bovril as a drink at football matches. In hot water. A faint whiff of shellac too. And a barrel-load of yeast. Offsetting this is a brief hint of brandied plum, so it's not all bad. It's smoky too, like an autumn's charcoal making.
Circumstance: Slap bang in the middle of doing way to much work and have just got some bad news about a cover shot we were trying to set up, so frankly I've felt better. I'm supposed to be doing more work tonight, but it can go and whistle.
Tasting notes: Charred blackcurrant initially along with a generous wodge of cheap sherry. Now I know that sounds unpleasant, but I really like this. Remember those sweets you used to get that were blackcurrant boiled sweets on the outside and licquorice in the centre? Well, this is the beer equivalent. What's disappointing is that it doesn't really develop into much. Not really. It leaves you with a desire for more, which is commendable. But I can't quite work out why, because there's no real complexity about it. A quick and dirty, if you will.
Drinkability: I'd only attempt more than one if you had a long evening by a log fire in the offing. Otherwise, two at most.
Gut reaction: It has the potential to cause all sorts of havoc if you overdo it, I'd guess. But since I'm not going to, I'll never know.
Session factor: You wouldn't. You just wouldn't.
VFM: 6.9. Not bad, I'd say. Quite strong, reasonably flavoursome, £1.63 a bottle and on my way home, so it doesn't do badly. It's not the special one, though.
Posted by Eddie Grace at 21:13