Like the wreckless divot I sometimes am, I allowed Saturday night's update to turn into a mini session.

And I foolishly failed to take any photos or notes, so half of my remaining calendar was wiped out in a trice. A rough hangover and sheepish feeling held sway for most of yesterday and there was simply no way I was ever going to update the calendar, let alone allow beer to pass my lips. There's a lesson in there for all of us, folks.

Remember to take notes and always have a camera with you.

On the upside, that means I get to have a crack at two beers tonight for the price of one update, so perhaps there is something to be said for irresponsible drinking after all.

Another positive to come from today is the news that the people over at the excellent Caught By The River website would like me to contribute some words about beer for a potential guide book they hope to publish. I'm understandably excited by this prospect and will keep you informed of any progress. Really looking forward to working with them and recommend you bookmark the site and keep checking it out, especially if you feel like taking a break from the hectic pace of everyday life.

Speaking of hectic pace, I need to get on with this. Two beers to drink and some advertising copy to knock into shape before bedtime, so without further delay... 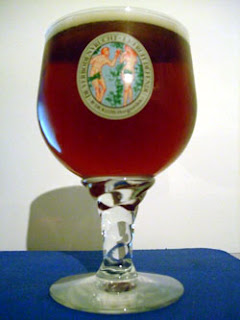 Beer: Theakston's XB
Country: Yorkshire, England
Strength: A sturdy 4.5%
Colour: Deep copper mixed with blood orange
Smell: Old man's beer. This reminds me of the first time I ever smelled my dad's beer and didn't much care for it. There's a faint whiff of kiwi fruit in there along with some orangy citrus
Circumstance: About to embark on a night of late work and drinking. I can see this being a difficult week given we're only at Monday
Tasting notes: Deeply malty with treacle undertones and a bit of dried fruit. But after that, it isn't massively full-bodied, as it claims to be on the label. I was hoping for slightly more complexity as well, but that's not evident either. On the whole, it promises much but disappoints. There's no real bitterness about it as well - you just get the rounded, malty taste, then nothing. I check the bottle to see if it's past its sell-by date, but no. Just a fairly average beer.
Drinkability: It's OK to drink as long as you don't expect too much. I might find it cloying after the first one, though, and I don't feel like drinking more than one. I'm reminded I used to drink this in a pub in Newcastle called The Brandling, where it was de rigeur to try and drink nine by 9pm. I succeeded in this venture once, although I don't remember too much else about the night. I'm not sure I could do nine of these in a year these days.
Gut reaction: Seems fine so far, but I'm going to mark it down as I needed to check the date, so obviously I'm none too confident.
Session factor: See above for Brandling escapades. Clearly it's possible, but I don't think it has the capacity to maintain my interest levels over a drawn-in evening.
VFM: 5.3. Another £1.50 scoop from Sainsbury's and rightly so. Was going to the shop anyway, so no inconvenience, but I feel let down by what promised more on first sight, smell and tasting. 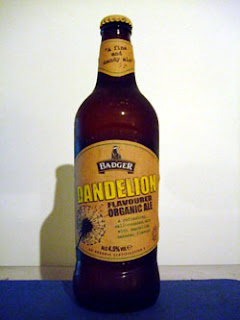 Beer: Badger Dandelion Flavoured Organic Ale
Country: England
Strength: 4.5%
Colour: The orange of countless 70s Sunday supplement advertorials about life in Scandinavia.
Smell: Smells like a dog's watered the dandelions, though there is a hint of hoppiness straining through. There's a suggestion of cheesy mustiness as well. Unpromising.
Circumstance: One beer in and still no further with the copywriting. Oops.
Tasting notes: Well I was fairly dreading this, I have to admit. Badger brewery has a nasty habit of infusing all it's beers with an overpowering floweriness that is difficult to ignore. Given this one's actually named after a flower, and not the most glamourous one at that, I'd practically written it off and was sharpening up the claws to give it a real shoeing. With that in mind, I'm slightly deflated to report that this really isn't bad at all. There is a suggestion of meadows as you take in your first gulp, but it's a refreshing breezy flowing cornfield that greets you rather than a sodden ploughed field. Full of blighted spuds. I'm also getting a faint taste of honey, but again it's not overbearing like some golden ales can be, especially brewed by Badger, so I'm pleasantly surprised again. That said, it is drifting into the arena of the lageresque with its colour and gaseous qualities, but I could imagine that isn't all that unwelcome once the weather warms. The dry, ashen finish rounds it off superbly as well. 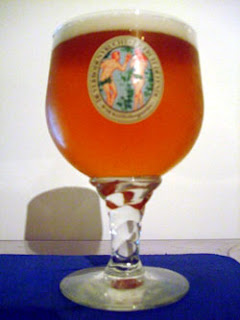 Drinkability: In the height of summer, I'd go so far as to say a few cold ones of this would go down handsomely. It's not as well suited to winter, but as a sprightly springtime sharpener, it stands up to more established peers.
Gut reaction: Ah yes, the drawback. It's already repeated on me substantially, jumping up and down like a yappy little Jack Russell begging to be noticed. Bless it.
Session factor: Entirely depends on the season. Too lightweight for winter evenings, it'll come into its own as the temperature rises.
VFM: 7.2. Yet another Sainsbury's effort, you cannot fault this at £1.50 a bottle. And there's double nectar points on offer too, for those that do such things, which seems entirely fitting for this self-proclaimed 'fine and dandy' ale.
Posted by Eddie Grace at 21:13