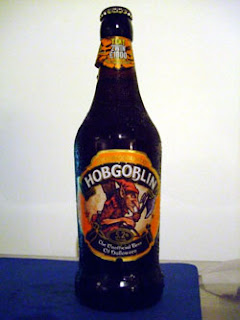 I've had a read back over one or two comments I've made on this blog so far and I have to apologise.

There's been nowhere near enough slating of stuff going on at all. OK, I ranted about work, but that's only natural in this stressful time of year. What's pissing me off more is that I haven't had the opportunity to really lay into a beer.

Maybe that's because I'm paying barely anything for them, so I don't feel like I'm being ripped off. Last year, I went to Utobeer in Borough Market. A fine stall under any circumstances and one that's looked after me on several occasions when I've fancied a different beer. But the outlay was crippling at more than 60 nicker, even given the 10% discount they generously applied.

For this year's credit crunch calendar, I'm unlikely to spend even half that; sensible drinking as I'm sure you'll agree.

So when it came to laying in the last few for the calendar, I beat a path to Lidl on Old Kent Road. The German discounter is well-known for knocking out decent booze for not much moolah, so it seemed the logical choice.

The Marston's Burton Bitter you already know about if you read the last post. Coming next (perhaps not tonight) is Shepherd Neame's Christmas Ale. The third was a trickier choice, but I settled on Wychwood's Hobgoblin as it felt vaguely from the same season as Christmas, although it dubs itself the official beer of Hallowe'en. Yeah, OK.

I've had many a Wychwood beer, so I was looking forward to sampling this one. They know their way around a brewery, this lot, although their marketing and advertising leave something to be desired. No problem, then. Should be a fine, upstanding ale, albeit veering towards the pricey at £1.49.

But I'm sad to inform you that Hobgoblin is the Paul Rideout of the beer world. Such early promise cruelly dashed upon the disappointment that is ending your career at Tranmere Rovers. As it happens, this beer tracks Rideout's career remarkably accurately. 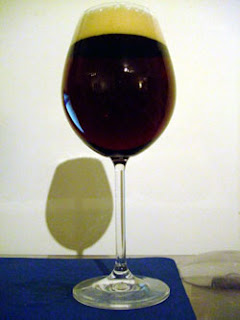 Beer: Wychwood Hobgoblin
Country: Oxfordshire, England
Strength: A handy 5.2%
Colour: Dark chimney red with a touch of Hallowe'en orange (cheers, Tom)
Smell: Dark toffee pudding with vanilla custard
Circumstance: Rising to the challenge of catching up on my beers and still getting up early tomorrow for what will undoubtedly be a tough journey in to work.
Tasting notes: Huge burst of raspberry followed by roasted liquorice and treacle toffee. I thought it was slightly wet at first, but the flavours did take over, although not for long enough in my book. It then peters out with a somewhat disappointing salty metallic taste. Then it feels like you've just had a spoonful of bicarbonate of soda, thinking it was icing sugar. After the great start, this one really lets itself down.
Drinkability: Easy enough to quaff as it's pretty smooth and well-balanced. But that finish can get lost.
Gut reaction: The sour ending of a beer is to gut-rot what bright colours are to potential predators in the wild. A portent of pooey evil.
Session factor: Not great, although if you kept swigging it before the finish had the chance to kick in, you might avoid all the sourness till later. Probably sweeping it under the carpet, though.
VFM: 5.8. This cost a massive £1.49 at Lidl, so it doesn't qualify for any bonus bargain points at all. And the crushing sense of disappointment after having had your expectations built up marks it down further.
Posted by Eddie Grace at 23:29